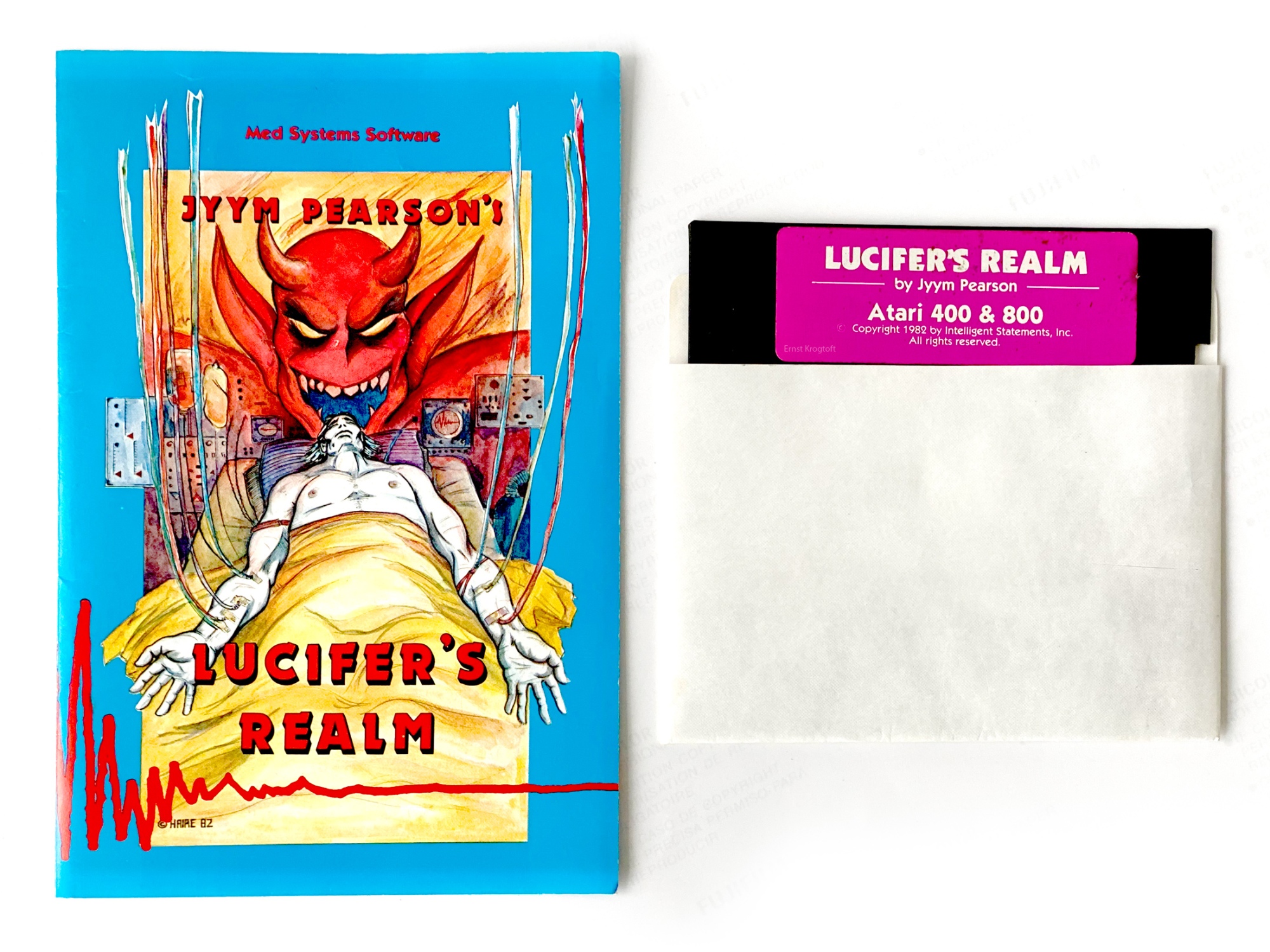 While working on an article about Med Systems/Screenplay I thought I’d do a (very) small article on Jyym Pearson’s Lucifer’s Realm.

You have died and are, unreasonably, heading straight down under… no not to Australia, further down, as far as you can go… to hell. In this fiery wasteland, Hitler is gathering an army, including Mussolini, reverend Jim, among others, to overthrow Lucifer himself. Help convince Lucifer of Hitler’s ill intention and get a free pass to heaven. It might sound like a piece of work from someone still high on a ’70s acid trip, nonetheless, this is the plot of Jyym Pearson’s 1982 adventure title Lucifer’s Realm.

While Pearson’s first game Zossed in Space, a space simulation game, from 1980 didn’t showcase his imaginative, interesting, and to some extend obscure writings, his titles that followed did, they would slowly establish him as one of the more interesting, creative and perhaps also unusual writers.
Pearson had a handful of pretty good and interesting text-only adventure titles released in Adventure International’s OtherVenture series in 1981 but when his forthcoming title The Insitute, with a more questionable and dark subject matter, didn’t quite fit the Adventure International catalog of games he was directed to Med Systems Software.
The Institute’s mental illness themed story luckily fitted quite snuggly between Med Systems other released adventure games.
In 1982, Pearson would, with help from his wife Robyn, write and program his second adventure game published by Med Systems, Lucifer’s Realm.

Lucifer’s Realm utilized the same interpreter Pearson had used for his Adventure International published titles and for The Institute. Besides the crazy premise of the game and obscure run-ins with people like Adolph Eichmann and John Wilkes Booth (Abraham Lincoln’s assassin), the whole idea of going to hell and striking a blow for all those how suffered and lost their lives to some of history’s most notorious madmen is quite genius, though the writing and game design does leave something to be desired. It’s mostly just a bizarre experience with a few laughs, a lot of raised eyebrows, and thought of somewhat misused potential.
The game was text-only and featured a simplistic two-word parser (verb and noun).

Pearson’s Lucifer’s Realm, here the Atari 8-bit disk-version.
The great-looking cover art was done by Michael O. Haire, who in the early ’80s did quite a few cover art designs. Later he would become a senior art director at Microprose where he would stay for 12 years, before moving onto Firaxis, Sid Meier, Jeff Briggs, and Brian Reynolds newly founded company after their departure from Microprose

The 1982 Med Systems release was only published for the TRS-80 and the Atari 400/800. In 1984 the title was rereleased with color graphics by American Eagle Software, Inc. for the Atari 8-bit line of computers, the Apple II, and the Commodore 64. The graphics were done by Rick Incrocci, who would, for many years, do freelance artwork for a myriad of computer games and later children’s books.

The American Eagle release looked absolutely gorgeous for its time (and still does), Incrocci did a great job visualizing the game

The American Eagle version came in a quite noticeable box, with cover art not only depicting all sorts of evil but also a big swastika

While I haven’t found any evidence indicating it to be true, rumors have it that Lucifer’s Realm supposedly was the first computer game to be banned in the U.S., because of its controversial cover art.
It was released in the UK by All American Adventures, under license from American Eagle in late 1985.

The All American Adventures UK release from 1985, which also featured the swastika. It was released for the Commodore 64 and Atari 8-bit (which might seem a bit strange since the Atari wasn’t a very popular home computer in the UK and Europe).
The British were a bit larger with the use of the swastika. When Wolfenstein 3D was released in 1992, the UK version would be the only box to feature the symbol of Nazism

After the completion of Lucifer’s Realm, Pearson would go on to write another two adventure games, released in 1983, before silently disappearing from the scene altogether. Sadly, he died of cancer in 1994.
Pearson is often regarded as one of the best adventure game writers in the early ’80s and the best writer in the Adventure International stable…besides Scott Adams that is. Like Adams’ games, Pearson’s were quite difficult but they did get a dedicated following.
Not much info is available on Jyym Pearson but I’m thinking of dedicating a small article to him and his games at some point in the future.