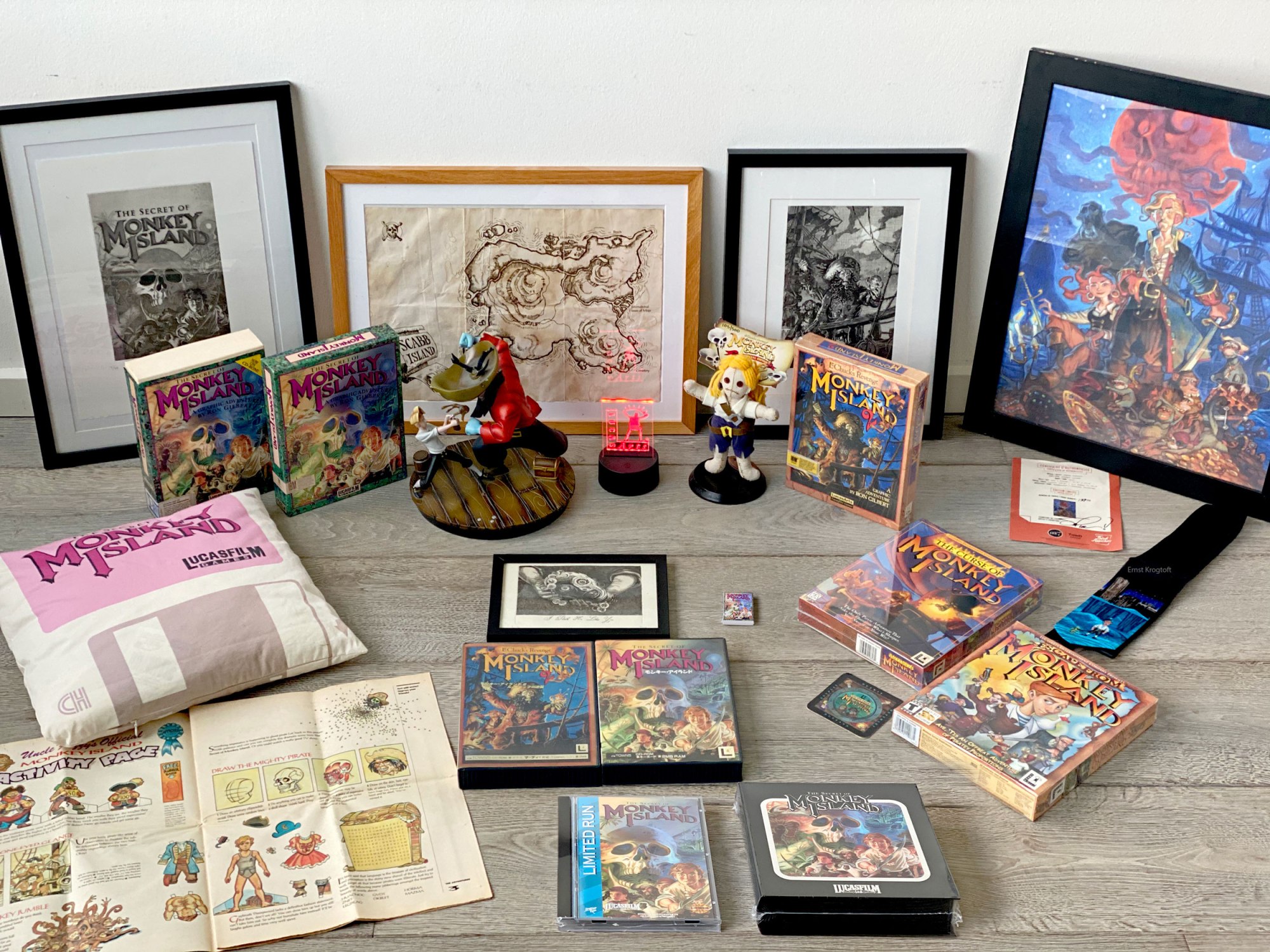 I have been working on an article on the legendary and amazing Monkey Island series on and off for a long time, it would have been absolutely perfect if it was all done by now, given that the first installment in the series, The Secret of Monkey Island was released 30 years ago this month…Yikes, time flies, but I’m nowhere near completing it. So here’s my humble tribute with just the first (rough and non-finalized) paragraph from the article and a few pictures of those of my items that are not stored away at the moment. Happy 30th-anniversary ol’ chap.

The Secret of Monkey Island, the graphic adventure that did everything right. Well, that might be quite a bold statement but when examining the graphic adventure game genre in the ’80s, advancements were slow, it was pretty much about sticking to the proven concept. Developers like Silicon Beach and ICOM Simulations had introduced the point and click interface in the mid-’80s but none of the two succeeded in heralding it into the mainstream, mighty Sierra On-Line had the genre in a firm grip with its text parser driven games. In 1988 Sierra would add support for Soundcards with the SCI release of King’s Quest IV, the first commercial IBM/PC game to finally allow the ditching of the squeaky pc-speaker. But taking advantage of the technological advancements wasn’t the genre’s main issue, it was the approach to the game-design itself.
The genre wasn’t lacking great storytelling, interesting plots, or memorable and loveable characters and settings, it was lacking a well-thought-out game-design with an easy and intuitive interface, with the player’s experience in focus. While the text adventure already had been mastered with Infocom’s extremely well-written fictional pieces, the graphical adventure game still had elements that often would lead to frustrating experiences, with illogical and questionable puzzle-design, dead ends, and broken story mechanics, and not to forget the notorious one thousand ways to end up dead, essentially giving the impression that the save game feature wasn’t implemented for when mum wanted you down for dinner but merely as a defense mechanism against a poorly designed game… All factors that easily could turn an otherwise fantastic game into a mediocre experience.
By all means, at the time most players didn’t take any regards, I certainly didn’t, this was how things were done…that was until Ron Gilbert entered the scene…

The original US 5.25″ EGA release with beautiful cover art by Steve Purcell.
This was the only version with the beautiful sunset shown at the very start of the game, it also had the “Insert floppy” joke when examing a mysterious tree stump in the forest. This was removed in the CD version since the joke led people to call Lucas asking for the missing disks.
I got the game for Christmas in 1990 and played it for months on end. I have since played it numerous times in my adult life, latest with my kids

The original US 3.5″ release of Monkey Island 2: LeChuck’s Revenge. The game was about five times bigger and to most extend even better than the first one

The Software Toolworks CD-Rom release of The Secret of Monkey Island, released in 1992. Essential the same as the VGA release but with a CD-Audio soundtrack, a few verbs removed, and an icon-based inventory, like we would see in Monkey Island 2

The Curse of Monkey Island, the 3rd installment in the series. Ron Gilbert and the rest of original team had at this point already left LucasArts, nonetheless, the game was still quite good, while the art-style was very different to the two “originals” it did look great..but to me (and much others) this was not the successor we had all hoped for…Yes we are still waiting for a true successor, are you listening Ron, Disney, God.
Escape from Monkey Island, the 4th and last in the original line of Monkey Island games from Lucas. I hated the switch to 3D graphics but I did play and complete it, it is also quite good.

The 10-inch resin statue, by Symbiote Studios released alongside the Special Edition of The Secret of Monkey Island in 2009. Depicting the epic battle between Guybrush and ghost pirate LeChuck. This is number 34/1000

The plush voodoo doll given out at E3/Comic-Con/PAX Events in 2010 alongside the release of the special edition of Monkey Island 2: LeChuck’s Revenge from 2010. This is number 105/500

Scabb Island map, handmade by Italian artist Filippo Scaboro. This was awarded to the first 50 backers of the 2015 Kickstarter campaign: Commodore Amiga: a visual Commpendium

The first two titles were released in 1992 for the Japanese multimedia home computer, the Fujitsu FM Towns. Essentially the games were similar to that of the US VGA versions but with better sound effects, also some of the insults were changed

One of the missing floppies from the original The Secret of Monkey Island, I remember floppy disk being way less floppy and also smaller but my memory doesn’t always serve me right

While many of my Monkey Island items (different releases etc.) are stored away at the moment, below is a few photos of what I do have on display.