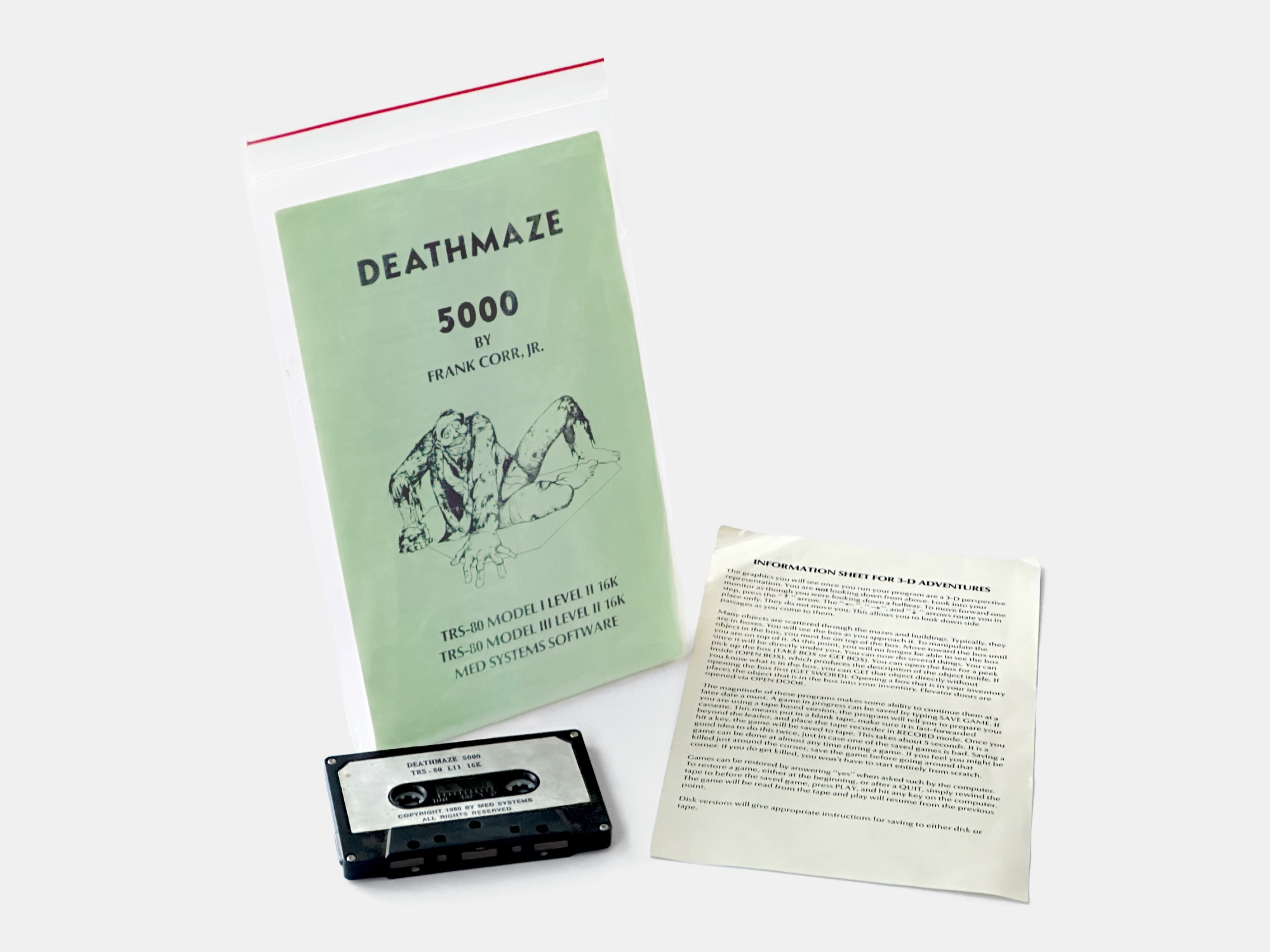 Welcome to another Quick Bits article. I will do a more general article on Med Systems Software at some point in the future, for now, I’ll be doing a few short articles on the company’s earliest games. Frank Corr’s Deathmaze 5000, a first-person 3D survival adventure game, was the second game released by the company. While it fairly quickly fell into obscurity, its notorious difficulty has over the years earned it somewhat of a reputation along with a small cult following.

Between his studies as a freshman at MIT, 18-year-old Frank Corr was falling in love with computers. His spare time was spent punching in BASIC commands into the TRS-80 home computer. The year was 1980 and while the Apple II and now Atari’s 8-bit home computer offerings were better in every aspect, the monochrome text-only TRS-80, which had been introduced three years earlier, was still the best-selling home computer and the one with the largest selection of software. The computer had come to herald text-only interactive fiction after Creative Computing‘s Software label had published Scott Adams‘ Adventureland in 1978, the very first microcomputer adventure game.
By 1980, fast-paced action games, with graphics and colors, were rapidly emerging on competing systems, and while the TRS-80 was slowly becoming more and more irrelevant in the consumer market interesting titles continued to emerge.

Corr’s pastime with the TRS-80 turned into Rat’s Revenge, a simple yet impressive first-person perspective maze game, initially made for himself to enjoy. When the game was complete it reached Mike Denman of Med Systems Software in Chapel Hill, North Carolina. Denman saw potential in the game and contacted Corr with a desire to publish it. While Corr initially had no intentions of selling it, he agreed.
Denman marketed and sold Rat’s Revenge while Corr plunged into Machine Language and wrote an English research paper on it. By June of 1980, Corr was unsuccessful in finding a job and decided to create a new game using elements from Rat’s Revenge. Utilizing Machine Language he was able to create more advanced routines and a more elaborate game started to take shape.

Halfway through development, the new game, Deathmaze 5000, slowly took on adventure game elements. While the basis of the game was Corr’s first-person perspective maze, he implemented survival elements and a simple two-word text parser for the player to interact with objects and monsters throughout the five levels. The game didn’t feature a timer but certain events were determined by the number of moves made. Food, torches, and other objects, some required to complete the game and some irrelevant, could be found throughout the levels.

The majority of adventure games at the time were, for non-seasoned players, difficult or even impossible to complete, not only by hard-to-solve and illogical puzzles but also by obscure game design decisions, complex mazes, and quirky text parsers. Corr wanted to target the seasoned players or the plain-out stubborn ones, completing Deathmaze 5000 shouldn’t take mere weeks but months, even with a crude hint system and a save/load feature built in. Navigating the mazes, which had to be mapped out, avoiding traps and monsters were very much based on trial and error as everything in the game was pre-determined, play it enough times and you would progress. One puzzle in particular would become notorious and the source to much brain drain.
When Deathmaze 5000 was finished in the autumn of 1980, after three months of work, Corr had created one of the more difficult games of era. By December 20, 1980, Med Systems claimed that only two people outside the company had successfully solved it…A Hint sheet with 15 encoded hints could be bought from the company at the cost of $1.

Frank Corr’s second game, Deathmaze 5000 was released by Med Systems Software for the TRS-80 in the autumn of 1980. It was later ported to the Apple II

Deathmaze 5000 combined simplistic 3D line graphics with adventure game elements.
Objects could be picked up and interacted with and an internal move counter determined when you needed to eat, light a new torch, or when being were attacked. The goal was to escape from a five-story building all while solving puzzles, collecting objects, fighting monsters, and avoiding traps

Adams’ adventures, which had heralded the text-only genre, were much more complex in story and plot but with Corr utilizing graphics as the main attraction of his game, this was pioneer territory. Ken and Roberta Williams‘ Mystery House, the first adventure game to include graphics, had been released only a few months earlier. While Mystery House would become one the most influential games ever made Corr’s survival adventure would eventually fall into obscurity.
Deathmaze 5000 would become the first game of four in the Continuum series of 3D graphic adventures by Med Systems and helped play an instrumental part in the company’s early years. Later games like Asylum and Laser Defense would further contribute to the company’s success.

3 thoughts on “Q-Bits From my Personal Collection – Deathmaze 5000, a 1980 first-person 3D survival adventure”