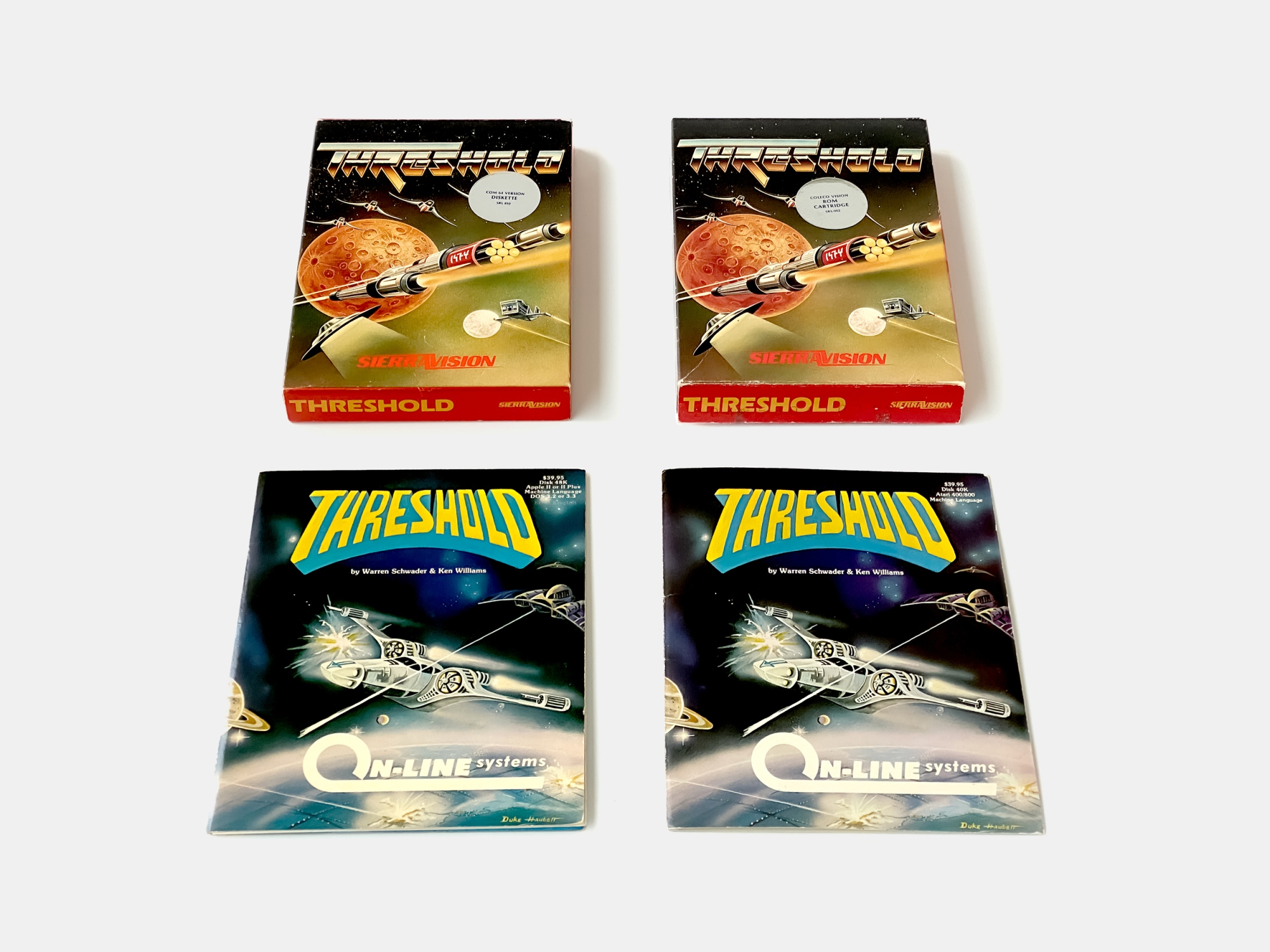 In 1980 when Ken and Roberta Williams, following the success of their first game Mystery House, were full at work creating The Wizard and the Princess, a cassette game reached Ken. The game was surprisingly well done with crisp graphics and well-crafted logic. At the time only a few programmers had the knowledge, let alone the skills to write effective and usable software in assembly language and utilize the Apple II’s Hi-Res graphics mode. The cassette game was the work of Warren Schwader a 21-year-old from rural Wisconsin.

Schwader had been introduced to the wonderful world of computers in 1977 when his older brother, who had been paralyzed in a car accident and needed something to relieve his boredom, had bought one of the first Apple II computers. Schwader quickly became his brother’s extended hands and helped him with various computer operations, punching in commands, bringing the computer to life. With Schwader being a meticulous and very systematic person it was a match made in heaven and it didn’t take long before the intriguing machine had fully captured his imagination. Every day Schwader would try out new software and different graphics demos, completely absorbed, spending nights debugging, unraveling their mysteries, bit by bit.

Being an avid player of arcade games his debugging and simple routines soon turned into fully playable games. After writing Bustout, a simple Lo-Res Breakout clone, he dove into assembly language where he spent the next couple of years trying to uncover the inner workings of the powerful language. At the time there were no books to learn from and the magazine articles were few and far between, everything he needed to learn was through trial and error.
His efforts resulted in Smash-Up, a Head-On clone, he copied to cassettes and sent to local stores where it sold a few hundred copies, not a smashing success but indeed proved that by taming the power of the computer, he from his mind, could craft experiences others could enjoy, earning a dime or two in the process.

At the time Schwader was getting into cribbage but the fact he often didn’t have anyone to play against, led him to his next project. In the Apple II’s simple and slow build-in mini-assembler he wrote a program that essential could be his cribbage partner. Over the next few months, the efforts produced a quite advanced cribbage game where the software’s algorithm could evaluate his hand by 12 major rules. The software worked flawlessly and was nearly as good at cribbage as Schwader himself. He copied the game to cassettes and started selling it alongside his earlier game.
surprisingly one of the cassettes managed to reach Williams all the way out in California. Williams Impressed with the game, its Hi-Res graphics, and Schwader’s ability to produce something this technically impressive in the crude mini-assembler, offered him a job.
Schwader faced a tough decision, recently his mother had passed away and he now helped take care of his disabled brother. A journey halfway across the country, to a small software company in the woods, came with great risks but also certain opportunities but would first and foremost leave his brother solely to the day nurses.
Scwader received his brother’s blessing and left Wisconsin and everything he knew for the West Coast and On-Line Systems, becoming the company’s first hired programmer.

Schwader moved into one of Williams’ small 2-bedroom houses, free of charge. His cribbage game was re-released on floppy under the name Hi-Res Cribbage, marketed using the same naming convention as the earliest On-Line Systems’ titles. The game managed to sell around 2.000 copies, 10 times as many as his own cassette version, a pretty good feat being a niche product in a newly established market.

Warren Schwader joined On-Line Systems in 1980 as the company’s first hired programmer. His cribbage cassette game, he had written back in Wisconsin, became Hi-Res Cribbage and re-released on floppy in the latter part of 1980

Schwader’s earlier games Bustout and Smash-Up, alongside a third graphical demo, William Tell was quickly thrown together and marketed as Thrilogy. Despite the On-Line Systems brand, the title only sold around 250 copies, clearly the market had moved on from very simple programmed games. Consumers wanted Bill Budge’s impressive visuals and Nasir Gebbeli’s ultra fast-paced action gameplay, and that they indeed got with Schwader’s next project.

At the Ahwahnee tack and feed store in Yosemite National Park, not far from On-Line Systems, Williams had seen SEGA’s newly released Astro Blaster, a fast-paced Space Invaders-inspired action coin-op. With Schwader having completed Hi-Res Cribbage and Trilogy, he and Williams were looking for a new project to take on and the impressive visuals, numerous fast-moving enemies, and even faster gameplay were just what consumers wanted. Schwader went to the tack and feed store and played Astro Blaster for hours on end, learning its premises, to be able to transfer the experience to the Apple II.
For the first two weeks, Schwader and Williams worked together, Williams wrote some of his fastest and most spectacular assembly language routines for the all-crucial animation engine. In the following three and a half months, Schwader would craft a large array of alien creatures, numerous movements and attack patterns, along with all the sounds and graphics. When the game was completed it delivered fast-paced action with heart-pounding intensity, a worthy contender to Gebbelli’s masterpieces.

Warren Schwaders Threshold took around 4 months to complete. It was released in 1981 for the Apple II.
Early in the project, Ken Williams wrote some of the all-crucial routines required for the fast and hectic gameplay

While the gameplay, with attacking alien creatures had been used over and over again, the intensive and fast-paced action was challenging and impressive and could give even a triathlete a heart attack.
Threshold for the Apple II became a major commercial success and one of those few titles everybody had to have not only to master but also to show off to the envy of friends

Threshold became a huge success and a bestseller of its day. Schwader wanted to follow up on the success and create a Threshold 2, something he could complete in a month, reusing most of the routines with new enemies and graphics but Williams was adamant in expanding beyond the Apple II ecosystem and commissioned Schwader to create a version of the game for the Atari 8-bit which was released in 1982.

Warren Schwader, by Williams’ request, produced a version of Threshold for the Atari 8-bit, released in 1982

The Atari 8-bit home computer, released in 1979, was in nearly all aspects superior to the now 5-year old Apple II. The visuals were better, the animation smoother, and it of course sounded much more enjoyable

As part of the reconstruction in 1982, On-Line Systems became Sierra On-Line, after Investor Jackie Morby, a partner at TA Associates, had bought 20 percent of the company. Shortly after, Sierra ventured into the lucrative action and cartridge-based market with its short-lived SierraVision brand, dedicated to the company’s action and arcade titles.

Threshold was re-released for the Commodore VIC-20, Commodore 64, and ColecoVision in 1983, all under the SierraVision label, Sierra On-Line’s dedicated but short-lived label for action and cartridge-based games

The Commodore 64 played very much like its Apple II and Atari 8-bit counterparts.
While the game had been impressive a few years earlier, the market was moving away from simple action games, consumers demanded more elaborate and refined experiences, a transition the Commodore 64 spearheaded

Threshold sold around 25.000 copies, earning Schwader $100.000 in royalties. While he had proven himself as a fierce programmer and would continue to push himself, his skills, and the apple II, his devotion to Jehovah witnesses made him turn away from violent games and create the excellent circus-themed platformer Sammy Lightfoot, released in 1983, a title I’ll cover in an upcoming article.

2 thoughts on “Bits from my personal collection – Threshold, a bestseller”