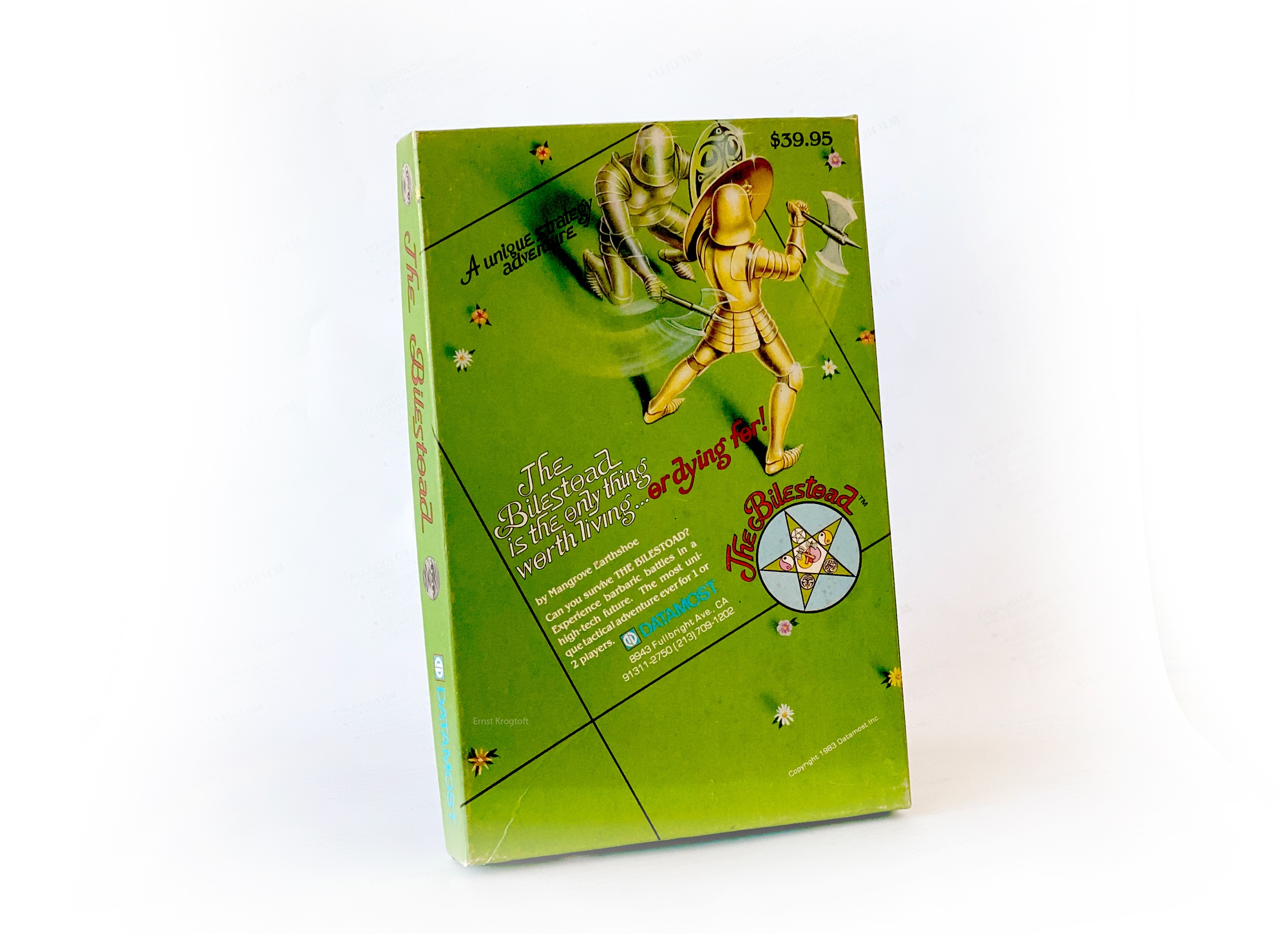 While working on a bigger article on Datamost I thought I’d branch out and go more in-depth with its most controversial title, Marc Goodman’s The Bilestoad from 1982.

When Marc Goodman finished his Apple II game The Bilestoad in 1982 he did it under the Pseudonym Mangrove Eartshoe. Goodman knew that his new original game was somewhat controversial and wanted to save his identity for any future developments he might endeavor into.
At the time, focus on violence in computer games wasn’t anywhere as widespread and pronounced as it later would become but there were some rumbling in the distance.
In 1976, coin-op manufacturer, Exidy released its video arcade game Death Race. A game that would become one of the first to attract great deals of attention for its violent content. The game centered around driving your vehicle into and over human-like figures and scoring points for doing so – think 70’s style Carmageddon. As icing on the cake, the game cabinet depicted imagery of death. It wouldn’t take more than a few months before newspapers and civic organizations started to criticize the game for facilitating violence in virtual form. This would herald more than 4 decades of criticism from politicians, media, parents, and activists of games with violent or other forms of controversial content.

A perfect study in how to attract attention put an image of death on your product. Exidy’s 1976 Coin-op Death Race became one of the first computer games to be criticized for its violent content

In the late ’70s and early ’80s, computer technology was still very much in its infancy, and depicting offensive visual gore was pretty much impossible from a technological standpoint. Computer games were for the most part either blasting crap-like aliens with lasers, eating dots while being chased by somewhat cute ghosts, or fighting evil in form of simple stick figures – There were far and wide between games with real offensive or violent content. Goodman’s The Bilestoad would introduce visual gore and mutilation to the home computer and it would do so with big and bold graphics, leaving no one in doubt of what was going on.
The Bilestoad was the outcome of Goodman’s programming endeavors resulting in his two earlier and moderately successful titles. Games that while being quite simple where technical impressive with animations, fluid gameplay, and even sound. Becoming confident in assembly language while doing simple game design Goodman wanted to branch out and far away from anything else, creating a unique and original title all while pushing the Apple II to its very limits.

Goodman had been exposed to computers from an early age. In the early ’70s, his dad had worked as a system analyst at a division of General Electric where he often had to go in on the weekends, often joined by an excited Goodman who got a chance to play around with the company’s computer equipment. When in his mid-teens, he had saved up enough money to buy his first computer, an Apple II.
While he earlier had been experimenting with BASIC programming and already had created a simple basic golf game, doing (fast) graphics on the Apple II basically required it to be written in assembly language. In 1980 when Goodman was in his last year of high school he would spend most of his time practicing 6502 Assembly language resulting in what would become his first commercial game, a clone of the hugely popular coin-op Asteroids.
Goodman, having no experience in how to get his game to the public, had a friend working in a local computer store who often went to pick up software from Scott Adams’ Adventure International. One day Goodman tagged along and got a chance to showcase a demo to Adams. Adams liked it and they ended up signing a publishing deal. The game was released by Adventure International in 1980 as Asteroid – no need to say that a clone of Asteroids bearing essentially the same name probably wasn’t the best of ideas and when mastodon Atari started to show movement the name was quickly changed to Planetoids and released. The game became reasonably successful and started to earn Goodman a bit of money.
During his freshman year of college, he sat out writing another simple but original space-themed game called Space Warrior. The title was quickly picked up by Brøderbund and published in 1981. Both Planetoids and Space Warrior hit Softtalk’s bestseller list and stayed for months. With his feet wet and with the insubstantial titles behind him Goodman wanted to set out and create the best game he possibly could do, something completely unique.

The Bilestoad
Goodman’s new game started out as a simple idea of two knights engaging in armed combat. Over the next one and a half years of on and off work, he developed an impressive and technical advanced one-on-one fighting game. This was before fighting games were a thing and while action games were nothing new, The Bilestoad’s big and detailed fighters left nothing to the imagination when limbs were chopped off and blood was spewing everywhere. The game featured an intricate combat system where both attack and defense had to be mastered, blocking your enemy’s blows while hitting him with your oversized battleaxe was a coordinated dance of keypunch combinations. The battles would take place on different islands scattered with various special items to help you in your battles. The playfield was scrolling as you moved around, quite a technical accomplishment. Three small radar screens, with different zoom-levels, on the right, showed the map, special items, and the enemy, giving the game a kind of “hunter and prey” like gameplay. The game could be played against a friend or against the computer.

The Bilestoad was like most of Datamost titles only released for the Apple II.

The Bilestoad was without a doubt one of the most advanced and visually impressive games of its time. While the gameplay might come off a bit slow and sluggish with moderns goggles, in 1982 this was the pinnacle of what was achievable on the available hardware. The 1 MHz Apple II was indeed pushed to its limit.

The Bilestoad is a “phoneticized” version of the two German words for axe (Beil) and death (Tod). Essential the game’s title is death by axe which couldn’t be more suiting.
The controversial content might have been the title’s biggest asset, this was the game to show of to your friends…to your parents probably not but unfortunately, it also would prove to be the games Achilles heel. The blood and gore would overshadow the game’s technical achievements, stunning graphics, and striking gameplay, and when Goodman approached the biggest publishers of computer games at the time both Sierra On-Line, Muse Software, and Brøderbund Software all rejected it for being too violent. Goodman managed to strike a deal with Dave Gordon’s Datamost, which packaged the game and released it in late 1982 or early 1983.
Alongside the beautiful box, the game came with quite an impressive manual not only giving an elaborate backstory but also went into depths on how to play and master the game.

The Bilestoad came with one of the most extensive manuals of the time. It not only featured an elaborate backstory but also great details on how to master the game.
The manual featured beautiful illustrations by Martin Cannon

Life was pretty bleak by the end of the twenty-fifth century. The Cities had long since grown together from over-population. The one city-state was suffering from widespread poverty. Bored, frustrated people filled the walkways. Housing was limited and filthy. No one starved, thanks to total automation, but not very many people lived fulfilled lives.
Tension was at peak. Mobs of people with nowhere to go roamed around, wreaking havoc on property and on their fellow men. They had no jobs, no money, and nothing useful to offer a world that treated them like excess baggage.
The city controller computers were worried. If trends continued on their present course, the city would be engulfed in holocaust. The mobs were at a breaking point between frustrated apathy and psychotic violence. It was plain that drastic change was needed…
The Bilestoad is a malevolent sort of amusement park where human nature can be vented without risking personal damage. This is accomplished by using computer simulated proxies called “meatlings”, which are under your control…

Just a few passages from the extensive backstory in the manual

To have a commercially successful game in the early ’80s meant that you had to have exposure in the magazines of the day. The controversial content would yet again haunt Goodman, most magazines were simply not interested in reviewing violent games. One game magazine even stated, “We will not review violent games like ‘The Bilestoad’ because it supports a negative trend in video games“.
The lack of exposure ultimately led to the game only selling around 5.000 copies, yet it still managed to be in a lot more Apple II homes, the game became widely pirated. In an interview from the late ’90s, Goodman stated that he yet had to meet or talk to someone who actually owned an original copy of the game.

In November of 1983, the game got well deserved praise from William Michael Brown of the Electronic Fun – Computers and Games magazine. Brown was very impressed with the game, reviewing it as a unique experience with spectacular animations, and sound. The gameplay was an outstanding blend of adventure and strategy and unprecedented combat realism. Giving The Bilestoad 4 of 5 “joysticks”.
In his review, Brown would very vividly write “...Sparks fly as axes bite through dented metal, you hear bones crunching, see blood spilling, heads rolling, and torn limbs littering the playfield“.
Brown would round off his review with “Whoever the pseudonymous of The Bilestoad is, he’s a designer to watch”.

I think Brown hits the nail right on the head in his review, he saw the game for what it was, a great and unique game – and while the blood and “gore” was a big part of the game it was yet just a small element in a really complete and well-developed package, rarely seen.

Datamost released another one-on-one fighting game in 1982 with Paul Stephenson’s Swashbuckler but it would take another two years before Jordan Mechner’s first commercial title, the fabulous and beloved Katateka would herald the one-on-one fighting genre into the mainstream.

With the absence of commercial success and really the lack of acknowledgment Goodman had hoped for (and had deserved), The Bilestoad would become his last game. He soon graduated from university with a degree in Artificial Intelligence and landed a well-paid job at an AI company. In 1990 Goodman finished his Ph.D. in AI from the private research university, Brandeis. He became the director of Intelligent Media at Continuum Software, working on data mining, machine learning, and intelligent agents.

Not only was the game impressive, so was the packaging

The violent computer game was not about to stop for anybody and things really took off in the ’90s with games like Wolfenstein 3D, Doom, Quake, Moonstone, Mortal Kombat, Carmageddon, Postal, and later the Grand Theft Auto series. The ongoing discussion on how violence in computer games might affect our kids is a debate still going strong today.