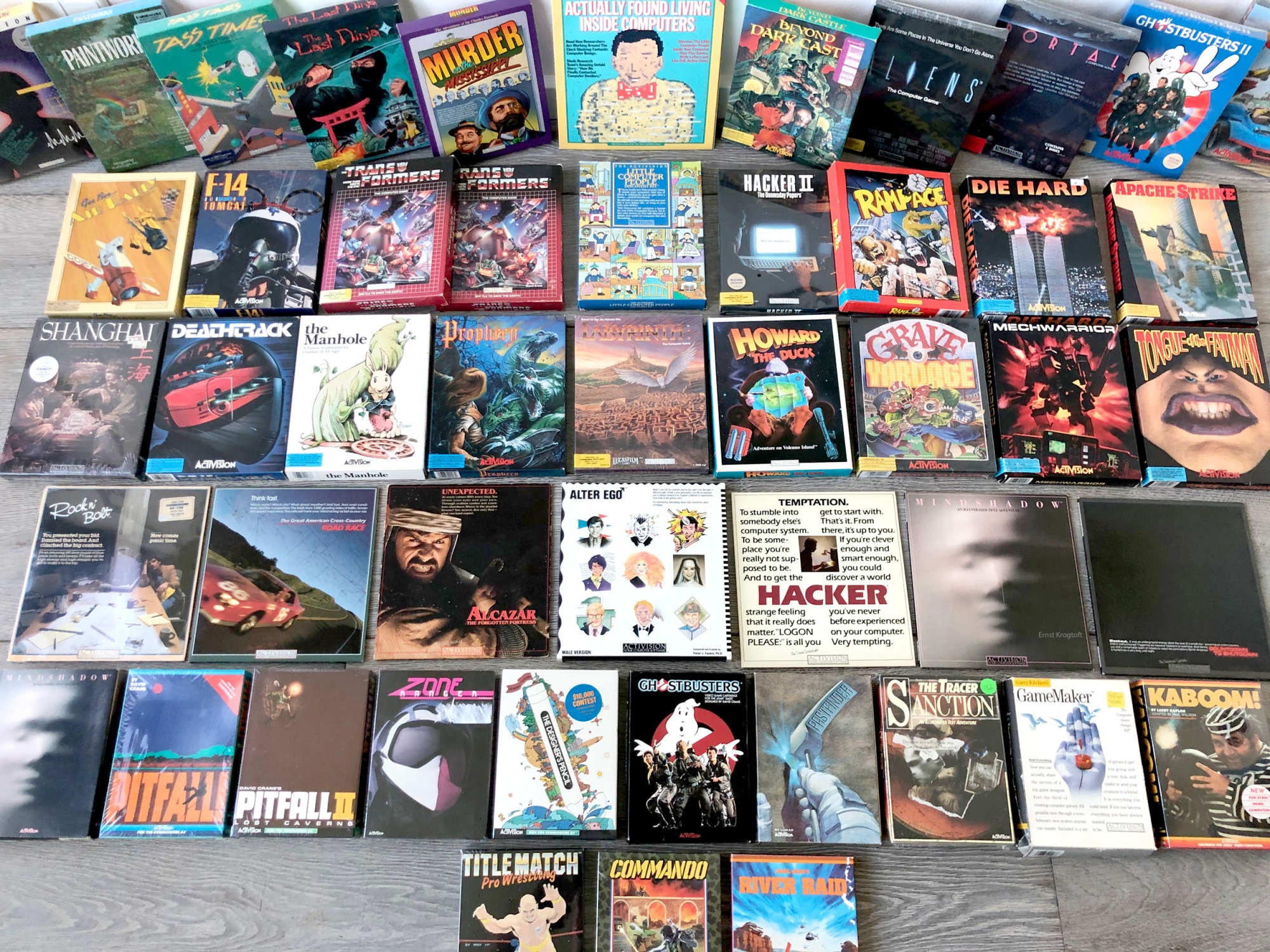 Before Activision, there was no such thing as a third-party developer, up until the founding of Activision in 1979 video console games were being published by the makers of the specific system the games were developed for. Companies like Atari and Mattel had full control of what and how games were published for their consoles. This was typically an issue for the developers who neither received financial rewards or credits for games that sold well.

In the late ’70s, the now-famous four, David Crane, Bob Whitehead, Alan Miller, and Larry Kaplan were combined responsible for around 60% of all games sold for Atari 2600, games that along with other cartridges from the company sold millions worth.
The four guys, each making somewhere around $30,000 a year ended up making Atari $60 million. The quartet stood up to the Atari management in early 1979 and demanded recognition as the artists and craftsmen they were, they wanted their names on the packaging and royalties. Atari CEO Ray Kassar, who just recently had replaced Nolan Bushnell when Bushnell sold off Atari to Warner Communications, wasn’t impressed and thought that anybody could do a cartridge.
Kassar shifted the focus away from game development and more toward marketing and sales and while Kassar sprinted Atari from millions to billions in sales in the late ’70s, he also removed the laidback style of work and put in order, organization, and efficiency. His efforts to revamp Atari provoked substantial animosity and as a result, most of the original Atari crew ended up quitting or getting sacked – many blaming Ray Kassar’s heavy-handed management style.

Active Television
David Crane left Atari in 1979 and together with, Miller, and Whitehead founded Activision the 1st of October 1979 with former music industry executive Jim Levy and venture capitalist Richard Muchmore; Kaplan joined soon – the quartet was yet again together, now on their own terms.
The name “Activision” was based on Jim Levy’s idea to combine ‘active’ and ‘television’, and made a lot of sense since the company at the beginning only focused on video console games – and also in order to appear above Atari in alphabetical lists.
Unlike Atari, Activision credited and promoted game creators along with the games themselves. The steps taken for this included emblazoned the developer’s names on the game boxes, devoting a page to the developer in their instruction manuals, and challenging players to send in their high scores. These approaches helped the newly formed company attract experienced talent and bred a kind of loyalty with consumers. They also designed a uniform package design and used the logo in-game to reinforce brand identity.

From consoles to Pitfall! to the personal computer
Activision’s first products were cartridges for the Atari 2600 video console system. Their first title for the US market, Dragster, was published in July of 1980 and from August 1981 they started publishing for the international market as well.
In 1982, Activision released Pitfall! on the Atari 2600. Designed and developed by David Crane, it was immediately a success and ended up on top of the video game Billboard charts for more than a year. Throughout the ’80s Pitfall! sold over 4 million copies, became the 2nd best selling title for the Atari 2600, next after Pac-Man, and helped define the side-scrolling platform genre.
The game was a technical achievement on the very limited Atari 2600 hardware. Crane had a few years earlier developed a technique to display a “realistic” running man and had since been looking for an opportunity to incorporate it into a game.

Pitfall’s success could somewhat be linked to Steven Spielberg’s hugely successful movie, Indiana Jones and the Raiders of the Lost Ark, which were released the year before, both shared somewhat similar action/adventure elements.

In the early years of Activision, one person would produce one title a year, amounting to a relatively small cost per game, to put this in context, Atari had in 1982 spend around $21 million to license E.T., a game that didn’t have anything on Pitfall!, and was not only rushed but also produced in such quantities (like so many of Atari and other publishers titles at the time) that it ultimately would lead to the video game crash in 1983, where heaps of games, simply drowned the market and couldn’t be sold, all of these games were either stockpiled in warehouses, dumped in landfills or destroyed.
As the market for game consoles rapidly declined, Activision also felt the heat, while they had numerous of successful titles, retailers started selling off, the earlier mentioned stockpiles of games, at a fraction of the cost, and why should consumers pay a premium for Activision’s titles when heaps of other titles could be obtained at literally no cost.
Activision branched out and to avoid similar events in the future, started producing titles for home computers and acquiring smaller publishers.

In June 1986 Activision purchased struggling text adventure pioneer Infocom. By this time, the adventure genre was already looming with graphic adventure games like King’s Quest and Space Quest from Sierra. Infocom’s quirky interactive fiction was in its final days of commercial viability. Six months after the purchase, Bruce Davis took over as CEO of Activision. Davis was against the purchase from the very and was heavy-handed in its management. In 1989, after several years of losses, Activision closed down the Infocom studios, extending an offer, to relocate to Activision’s Silicon Valley headquarters, to only 11 of the 26 employees. Five of them accepted the offer.

Crane would continue to create games at Activision, In 1984 he programmed and designed Ghostbusters, based on the 1984 hit movie of the same name. In 1985 he designed Little Computer People released for the Commodore 64, one of the very first if not the first life simulators predating simulators like The Sims by decades. I’ve earlier written an article on Little Computer People, which can be found here.

Cranes’ last game before he left Activision in 1986, Transformers – The Battle to Save the Earth, was an action/strategy game based on the popular ’80s animated cartoon of the same name. Around the same time period, Activision released multiple titles based on blockbuster movies, some more successful than others.
Crane left Activision in 1986 to co-found Absolute Entertainment along with Garry Kitchen.

Activision titles based upon popular movies of the ’80s.
Transformers was based on the popular ’80s animated cartoon of the same name

Like Electronic Arts, Mindscape and others, Activision would for a short period of time, release a few games in the classic album sleeve format.

Besides developing its own games, Activision also published for other prominent game developers; titles like Interplay’s Mindshadow and Lucasfilm Games’ Labyrinth.

Before Lucasfilm Games’ started publishing its own games, with Maniac Mansion as the first, its games were being published by other companies.
Labyrinth, based on the Jim Henson’s fantasy movie of the same name, Lucasfilm Games first adventure game, was released in 1986 by Activision

Activision would go on to publish Cyan’s The Manhole, the very first personal computer game to be released on CD-ROM, Cyan would later go on to create one of the best selling titles for the personal computer, Myst, unfortunately, tumultuous and hard financial times at Activision in the early ’90s would end up destroying the relationship between the two companies. Cyan went to Brøderbund as its new publisher. Myst would end up selling more than 6 million copies. While Activision could have used Cyan and Myst in the ’90s to stabilize and turn a profit, they managed with several of their own successfully-developed games to turn a profit.
In 2008 Activision merged with Vivendi, who owned both Blizzard Entertainment and Sierra Entertainment.
Activision Publishing remains today a subsidiary of Activision Blizzard following the merger.

Below my ’80s Activision collection. I absolutely love the uniform box design and beautiful artwork that went into these.

One thought on “Bits from my personal collection – Activision, from consoles to the personal computer”