Inspired by Colossal Cave Marc and Dave created what was to become the very first Infocom game, Zork, in 1977. Developed on MIT’s enormous mainframe which allowed the game to be much larger than the average personal home computer could handle, the game had to be split into 3 parts.

Zork I: The Great Undercover Empire was released in 1980 for the TRS-80 and ended up selling more than a million copies across several platforms thanks to superb writing and packaging.

Throughout the early eighties Infocom was one of the most dominant computer-game companies and with their games written in Infocom’s own programming language ZIL (Zork Implementation Language), that compiled the games into byte code, that could be run by their virtual machine called the Z-machine interpreter, the games could “easily” be ported to new computer architectures. With the interpreter Infocom was able to release most of their games for the most popular home computers of the day simultaneously.

By 1982 the market was moving to graphic adventures. Infocom was interested in producing them, that year proposing to Penguin Software that Antonio Antiochia, author of its Transylvania, provide artwork. Within Infocom the game designers tended to oppose graphics, while marketing and business employees supported using them for the company to remain competitive. The partnership negotiations failed, in part because of the difficulty of adding graphics to the Z-machine, and Infocom instead began a series of advertisements mocking graphical games as “graffiti” compared to the human imagination. The marketing campaign was very successful, and Infocom’s success led to other companies like Broderbund and Electronic Arts also releasing their own text games.

Activision acquired Infocom in 1986 for $7.5 million

By 1988, rumours spread of disputes between Activision and Infocom. Infocom employees reportedly believed that Activision gave poorer-quality games to Infocom. Activision moved Infocom development to California in 1989, and the company was now just a publishing label. Rising costs and falling profits, exacerbated by the lack of new products in 1988 and technical issues with its DOS products, caused Activision to close Infocom in 1989 after which some of the remaining Infocom designers such as Steve Meretzky moved to the company Legend Entertainment, founded by Bob Bates and Mike Verdu, to continue creating games in the Infocom tradition.

Here we have my partly sealed Infocom collection.

Infocom was known for shipping creative props, or “feelies”, with its games. The boxes might look small but the are full of great stuff. 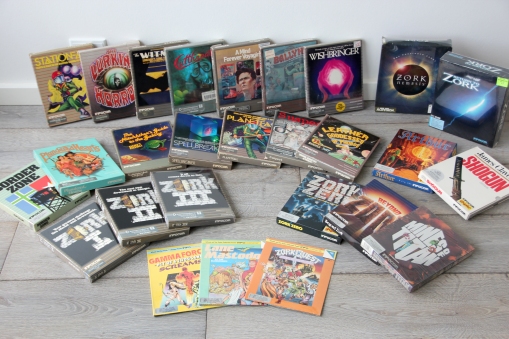 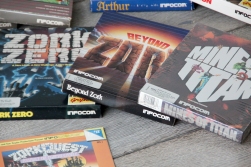 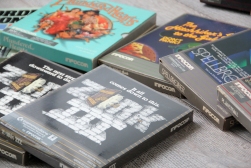 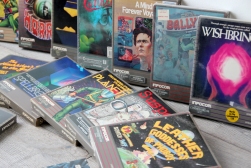