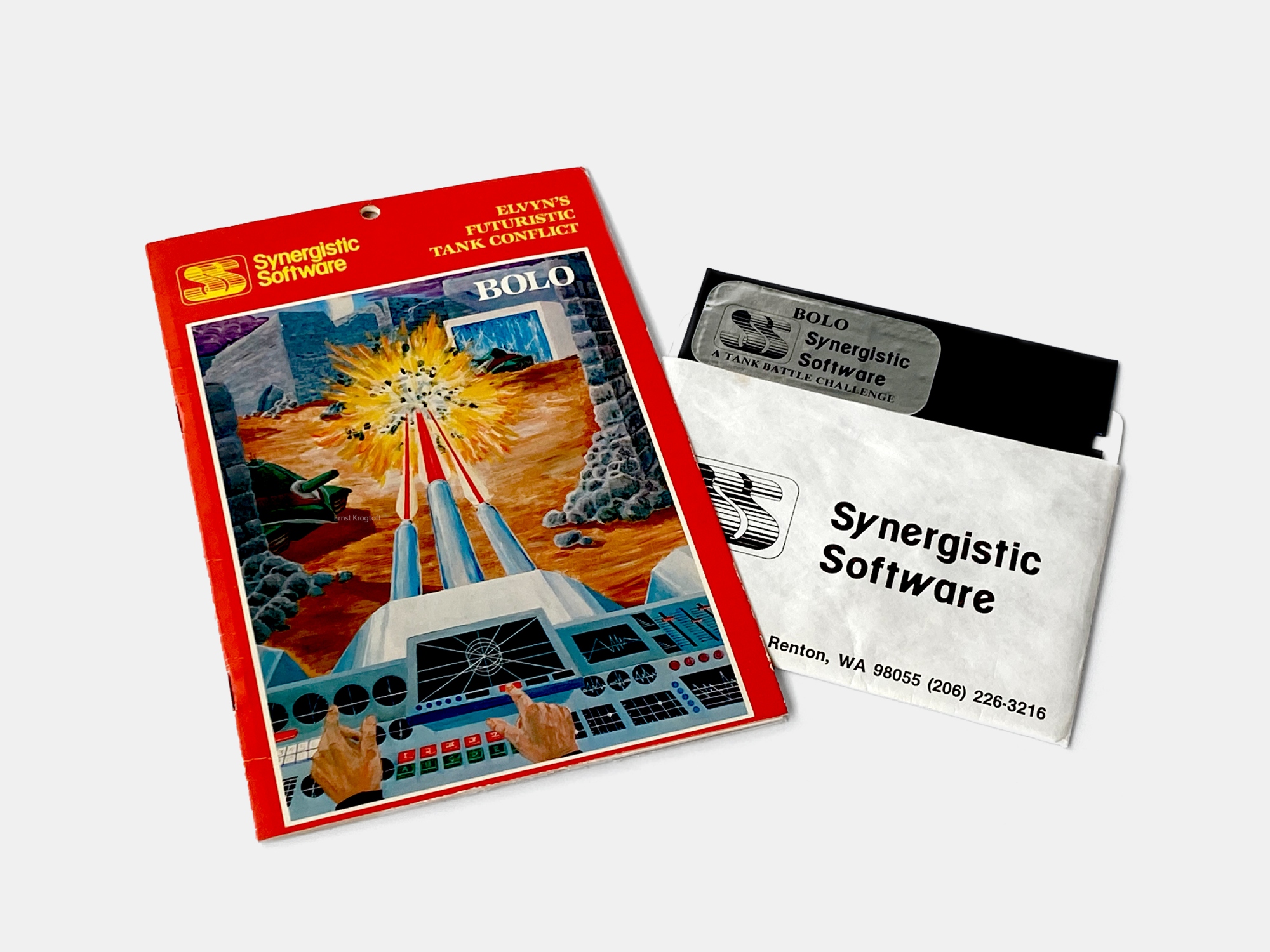 In 1978 Robert Clardy created Dungeon Campaign, one of the earliest examples of a graphic role-playing game for the personal computer. Over the next few years, Clardy would continue to expand upon his fantasy universe with a number of follow-up titles that would come to herald Clardy’s company Synergistic Software as one of the pioneers in the early industry. Around 1980 the company started focusing on publishing other titles as well, among those was Bolo, an impressive fast-paced multidirectional tank shooter.

By 1982 the Apple II home computer was five years old. Since its introduction, far more capable computers had seen the light of day and now Commodore was about to launch the most successful home computer of the ’80s, the Commodore 64. While the Apple II had seen a few updates over the years it was essential the same 1 Mhz machine as Jobs and Wozniak had introduced to the public in 1977. Nasir Gebelli had shown that his titles on the rather simple computer could compete with many of the coin-op video arcade games of the time. His fast-paced and visually impressive action titles from 1980 and 81 had heralded Gebelli as one of the early prodigies, now a year or more later, in a market considerably bigger and vastly more competitive, earning the same fame proved nearly impossible. Nonetheless, programmer Jim Lane managed to create a game that would impress consumers and reviewers alike but never manage to become a commercial success or carve Lane’s name into the annals of gaming history

Lane’s tank maze battle game was inspired by a demo he had seen on another micro and by American science fiction author Keith Laumer‘s 1976 sci-fi classics Bolo: Annals of the Dinochrome Brigade, a series of novels that featured self-aware tanks. Lane, together with a friend, in their spare time, started working on the ultimate tank battle game. While the friend dropped out when he moved out of state, Lane formed Elvyn Software and kept working in the hope he could complete it for the approaching all-important Christmas season deadline. Robert Clardy’s Synergistic Software picked it up and published it for the Apple II in 1982.

Jim Lane’s fast-paced tank action maze game, Bolo, was released by Synergistic Software in 1982 for the Apple II.
While highly regarded at the time it became a commercial failure and was hugely pirated. This, being one of only a few original copies I know of

Bolo became one of the first commercial games to tie into a novel and while Lane tried to get sci-fi writer Keith Laumer to write the scenario description, he declined and Lane and his then-wife wrote it

Bolo featured impressive fast-paced gameplay, a huge random generated maze, impressive smooth scrolling, pixel-accurate collision detection, great visuals, and sounds. It was one of the most impressive titles released for the Apple II and managed to climb to the top of Softalk Magazine’s #1 game of the year in 1982 to tie with Brøderbund‘s Choplifter.
Softline Magazine, in March 1983, reviewed Bolo positively and praised it for its animation, graphics, and playability, stating it was in every way superior to Tron, the multidirectional shooter spawned by the movie and culture phenomenon of the same name. Unfortunately, Bolo was released as the market exploded with new capable computers and all of the next-generation software that followed. With piracy, the commercial lifetime for an Apple II game was a mere couple of months, at best, after that pirated copies would turn up everywhere. Despite its success as a game, and a masterpiece showcasing what Lane and the Apple II were capable of, Bolo became a commercial failure.

In the March 1983 issue of Softline Magazine the reviewer noted that the game required almost superhuman, multi-finger coordination and
speed-of-light decision making, clearly none of which I possess.
The turret can be tuned separately from the tank but my lack of skills resulted in disaster when trying to control the tank and turret direction at the same time. The layout of the controls allowed for two players to control the tank simultaneously, one driving the tank and one controller the turret

Lane continued to work on a few Apple II games but went back to earning a living, writing compilers, and working on embedded systems.

In 2010, Time columnist Lev Grossman ranked Bolo number three out of 10 on his 10 Greatest Games for the Apple II list. He praised the game’s seriously fast action, smooth scrolling, elegant graphics, and the surprisingly excellent AI of the enemies.
Today, 40 years later, Bolo still has a following of people many of who cherish it as one of the most prominent Apple II games of their childhood.