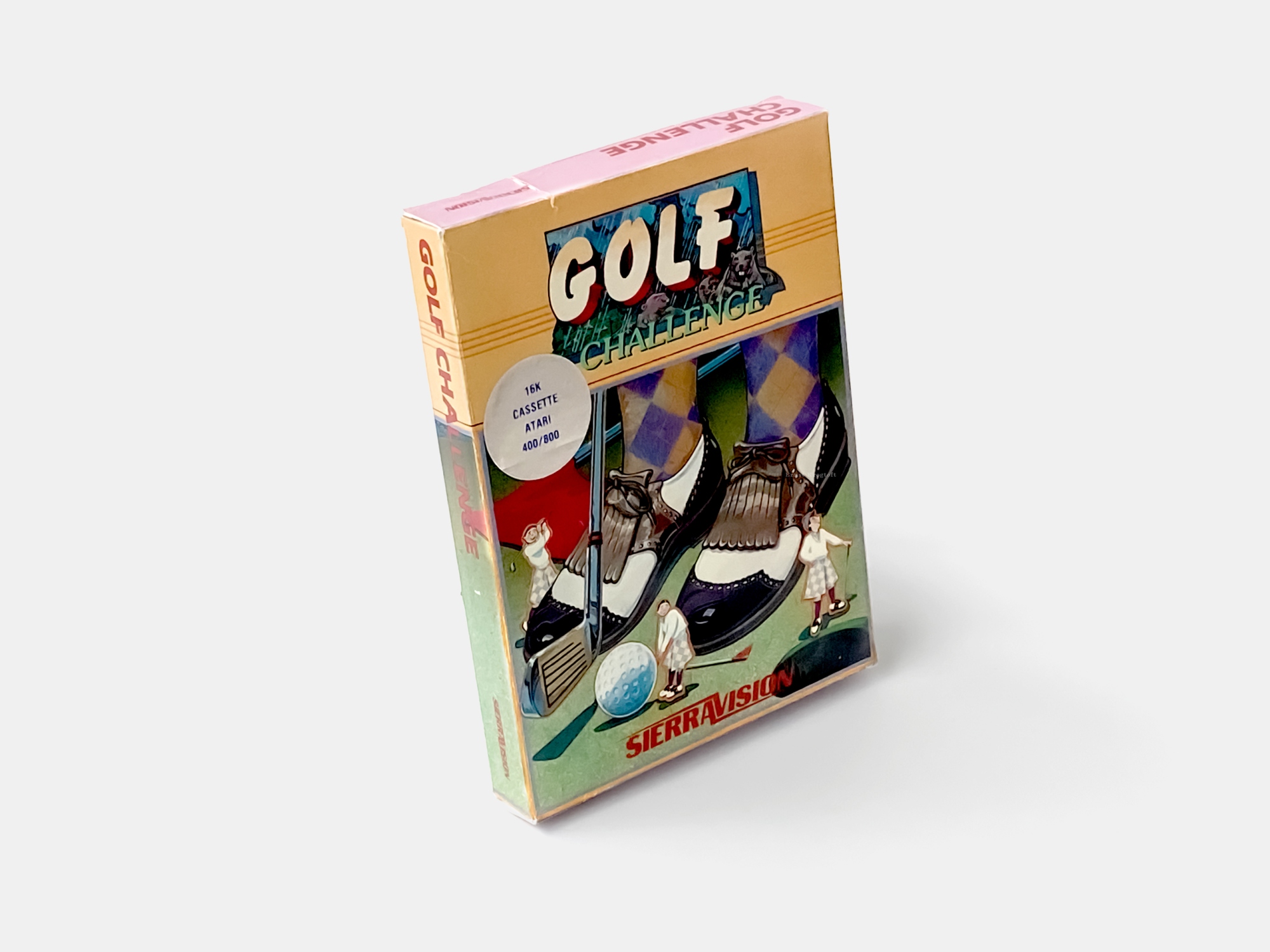 Never believe in everything you read especially when it comes to advertising material. Sierra On-Line’s Golf Challenge was marketed as a game where parents finally could beat their kids, making you believe it was somewhat true to the real game of golf where skills, techniques, and knowledge of the different clubs and Newtonian physics were needed for success. The truth was, in reality, a far cry from that.

The computerized version of golf earned its mainstream fame in the latter part of the ’80s with Accolade’s Jack Nicklaus series and Access Software’s Leader Board and later its hugely popular Links series. Technology was now fast enough to do complicated simulations, a perfect fit if you wanted to create a realistic golf game. But rewind a decade and this was far from what the late ’70s and early ’80s technology could muster. Yet, in the young but thriving industry, nothing was deemed impossible. Everything could be simplified, boiled down to the bare minimum, and blanks filled in by the imagination of the player. But for a computer golf game to resemble the real-life challenges many different factors had to be present, something a bit optimistic for a real-time game running on a 1 Mhz processor with 4Kb of memory.

In 1980 more than 13 million people played 15 holes or more of golf in the US, making it one of the most popular sports, indeed a great incentive to try and move the game onto video game consoles and personal computers. Video and computer games not only reached a core audience for any given genre but in general had a much more widespread reach, anything that could be played was played, good or bad.
In 1978 Magnavox Odyssey owners got the chance to play golf on their television sets. While the graphics were clunky and so the gameplay, it was definitely a start. In 1980, Atari released Golf for its Atari 2600 console, and in 1982 Sierra On-Line released Golf Challenge for the otherwise rather capable Atari 8-bit line of home computers. Common for all of these early attempts were that none managed to incorporate more than simple mechanics resulting in games that in reality hadn’t much to do with real-life golf, other than getting the ball in the hole, that is.

Golf Challenge was released as one of the first games under Sierra On-Line’s dedicated but short-lived SierraVision label in 1982. It was created by Harold Schwab and published on cassette for the Atari 400/800.

Golf Challenge was released in the latter part of 1982 as one of the first titles in Sierra On-Line’s dedicated but short-lived label for arcade and cartridge-based games. It was only released for the Atari 8-bit line of computers and only sold a limited number of copies

Golf Challenge looked good, or at least the course was nicely depicted and readable. The player looked like the arms had been removed and a golf club surgically attached instead. The game had no real physics and hitting the ball correctly, getting it to go in the intended direction was a rather frustrating task. Penalties were given hitting the rough, sandpits, or water hazards and trees would stop the ball completely.

The course was visually easy to read, hitting the ball in the right direction a bit tougher. Hitting the ball onto the green, switched to a closeup view for putting

While any resemblance to real golf was left, well on the golf course, Golf Challenge could be fun and challenging, especially as it supported up to 4 players, meaning the whole family could enjoy 9 or 18 holes together.
Nearly a year after its release the game was briefly featured in the September 1983 issue of PC Magazine. Here the reviewer concluded that he would rather watch grass grow than play Golf Challenge…Ouch, that doesn’t sound like a hole in one to me

Unfortunately, not a lot of info exists on either Golf Challenge or its creator Harold Schwab.