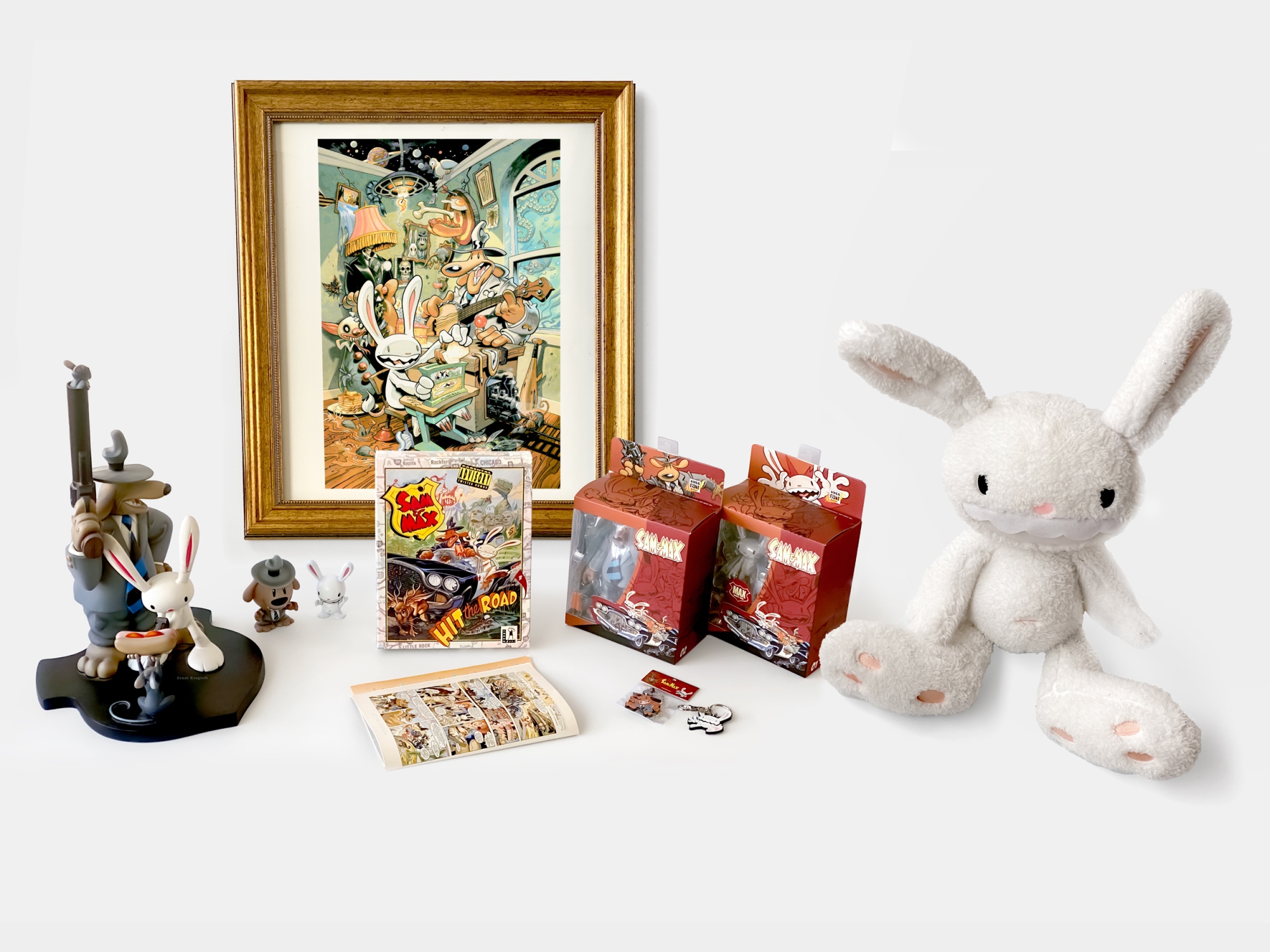 If you’re keen on getting a slice of parodied Americana pop culture, mixed with wacky and humorous characters, LucasArts’ 1993 adventure game Sam & Max Hit the Road is a sure winner. While Steve Purcell’s vigilante private detective universe, starring Sam and Max, an Irish Wolfhound in a suit and a restless naked rabbit, earned its first widespread recognition (especially outside the US) with the release of the game, the characters had existed for well over a decade.

In the late ’70s, Purcell’s younger brother, Dave, was creating various simple comics featuring a dog and rabbit team of detectives. With often unfinished comics laying around the house, Steve, as the older brother he was, started finishing them as cruel parodies on Dave’s stories and its two characters. While young Dave, over time, lost interest in Sam and Max, Purcell continued to work on them, creating his own set of stories using the wacky characters.
In 1980, while being an undergraduate at the California College of the Arts, Purcell took the anthropomorphic dog and rabbit and produced a number of Sam & Max comic strips for the university’s weekly newsletter.
Following his graduation in 1982, Purcell became involved in freelance illustration, working briefly for Marvel Comics and later on with cartoonist Steven Moncuse on his Fish Police series.
The detective duo debuted in 1987, in the first feature-length comic series, Sam & Max: Freelance Police when Moncuse offered Purcell the opportunity to get his stories published through his Fishwrap Productions. The comic contained two stories that along with a third became the basis for Purcell’s future work on the universe.
Many aspects of the comics were influenced by Purcell’s own experiences, creating stories with personal and unique elements.

Sam & Max: Freelance Police, soon gained a devoted following and eventually got the attention of artists at the Lucasfilm Games Division. Purcell was recommended to art director Gary Winnick and was hired as an artist and animator.
In 1988 Purcell’s first published work became the beautiful cover art for Zak McKracken and the Alien Mindbenders, the second title utilizing Ron Gilbert’s SCUMM scripting language and game engine. To present the SCUMM programmers with something to practice and do internal testing on, Purcell created a few animations for his Sam and Max character alongside their New York office as a backdrop. The characters soon earned their recognition throughout the office.
Purcell went on to do animation for the 1989 adventure title Indiana Jones and the Last Crusade before diving into the fabulous Monkey Island series of games.

In 1990 Lucasfilm started publishing The Adventurer, a quarterly magazine designed as a consumer newsletter, including staff interviews, promotion of upcoming releases, merchandise, and company news and headlines.
To add a leisure element, Purcell created a series of comic strips which would include his Sam & Max characters and parodies on the company’s released games.

One of Steve Purcell’s twelve Sam & Max comics featured in The Adventurer newsletter, a physical magazine published from 1990 to 1996 by LucasArts

A reorganization of George Lucas‘ companies in 1990 led to the Lucasfilm Games division moving out of the iconic Skywalker Ranch in Marin County and into offices in nearby San Rafael, now with a new name, LucasArts.

With LucasArts having considerable success with its adventure games and especially the in-game characters alongside the positive reaction to the Sam & Max comic strips in The Adventurer, the company, in 1992, offered Purcell the opportunity to produce an adventure game based on his Sam and Max franchise. The same year development on Sam & Max Hit the Road began, partially based on Purcell’s 1989 comic On the Road and events from his own life, like his childhood road trips across the US with his family.

A small but experienced and ambitious team of designers, consisting of Sean Clark, Michael Stemmle, and Purcell’s soon-to-be wife Collette Michaud, who was head of the LucasArts art department, was brought together. LucasArts planned a relatively short production schedule of only eight months, as management wanted a second adventure title to accompany Day of the Tentacle on its planned release in 1993. The tight timeline required the team to employ storyboarding, a first at LucasArts, to be able to visualize the entire project, locate pitfalls and keep everything as streamlined and efficient as possible.
A story was quickly developed with the vigilante detective team traveling across the United States in search of Bruno, a frozen bigfoot, and Trixie, a Giraffe-Necked Girl, both having escaped from a carnival. The journey takes the player through a parody of America’s bizarre and wonderful tourist sights, most of which now represent a forgotten time when road trips and weird small town attractions were a united family event.
Alongside the main story, Purcell added several minigames leaving players with things to do if they got stuck or needed a break from the story and its puzzle-solving.

With the short timeframe, it was obvious that Gilbert’s ingenious and proven SCUMM engine, which had been used in every single Lucas adventure title reaching back to Maniac Mansion in 1987, was the go-to tool. The framework had seen numerous iterations as technology had advanced throughout the ’80s and early ’90s, and the team decided it yet again needed an overhaul. The classic verb selection, taking up most of the bottom part of the screen was replaced by a multi-function mouse cursor, in which actions could be cycled through by clicking the right mouse button. Removing the verb jitter and cleaning up the UI, the designers could focus on immersion and pinpoint accessibility.

Sam & Max Hit the Road, when released, became a commercial success and exceeded every figure projected by marketing, which should be mentioned was set low considering the game being one of a kind and unproven territory in both style and expression.
It was praised for its humor, dialogue, amusing and wacky characters, and bizarre locations, and stood out from the otherwise fierce competition in the genre at the time.

In November of 1993, a CD-ROM version with full voice acting was released, the game was otherwise identical to the floppy counterpart.
The sheer quality of the voice-acting, using professional actors, something LucasArts mastered in the first try with Day of the Tentacle, smoked the competition (looking at you Sierra).
With favorable reviews in most gaming magazines and being one of four nominees for the 1994 Annie Award in the Best Animated CD-ROM category, it grew to an instant classic and one of the greatest from the golden era of adventure games.

Sam & Max Hit the Road was released on CD-ROM in late 1993, as one of the first adventure titles to feature full voice acting.
The CD version besides the superb voice-acting also added four bonus CD Audio tracks.
The game was released for the Macintosh in 1995 and also localized for a number of countries.
A 2002 re-release included compatibility with Windows

Purcell’s Sam and Max universe gained widespread fame and traction following the release of the game. FOX produced a television series together with Canadian animation studio Nelvana where Purcell joined story editor Dan Smith in 1996. The series first aired on FOX Kids in the Autumn of 1997. The following year the series won the Gemini Award for Best Animated Series before being canceled in April of 1998.
It would take another decade before the detective duo yet again appeared in a commercially released game. In 2005, LucasArt’s license with Purcell’s Sam & Max franchise expired which allowed him to bring it to Telltale Games, a new company formed by members of Stemmle’s old development team. The episodic adventure game series was published in 2006 and 2007 and is now considered the first successful application of the episodic distribution model.

In December of 2008 Symbiote Studios released a rather large and high-quality limited edition (1.000 pieces) statue based on Steve Purcell’s Sam and Max characters

Symbiote Studios went back to Sam & Max in 2012, creating two smaller figurines. By using magnets, limbs could be manipulated while still being attached.
(the figurines came with handguns but my kids have made them disappear, just like with everything else they touch)

After the brief stint at Lucas’ Industrial Might and Magic, Purcell went on to Pixar Animation Studios, where he on the side acted as an advisor in the development of LucasArts’ Sam & Max: Freelance Police, a 3D sequel to the original Sam & Max game. Development began in 2002 and Purcell assisted Stemmle’s development team with concept art and the game’s plot. Unfortunately, the project was abruptly canceled in the spring of 2004.
While LucasArts had been advertising a commitment to invest more in its original properties it was clear that both economic and market conditions, at the time, worked against the development of classic adventure games, leaving the 2000 title Escape From Monkey Island the last original adventure game from LucasArts.