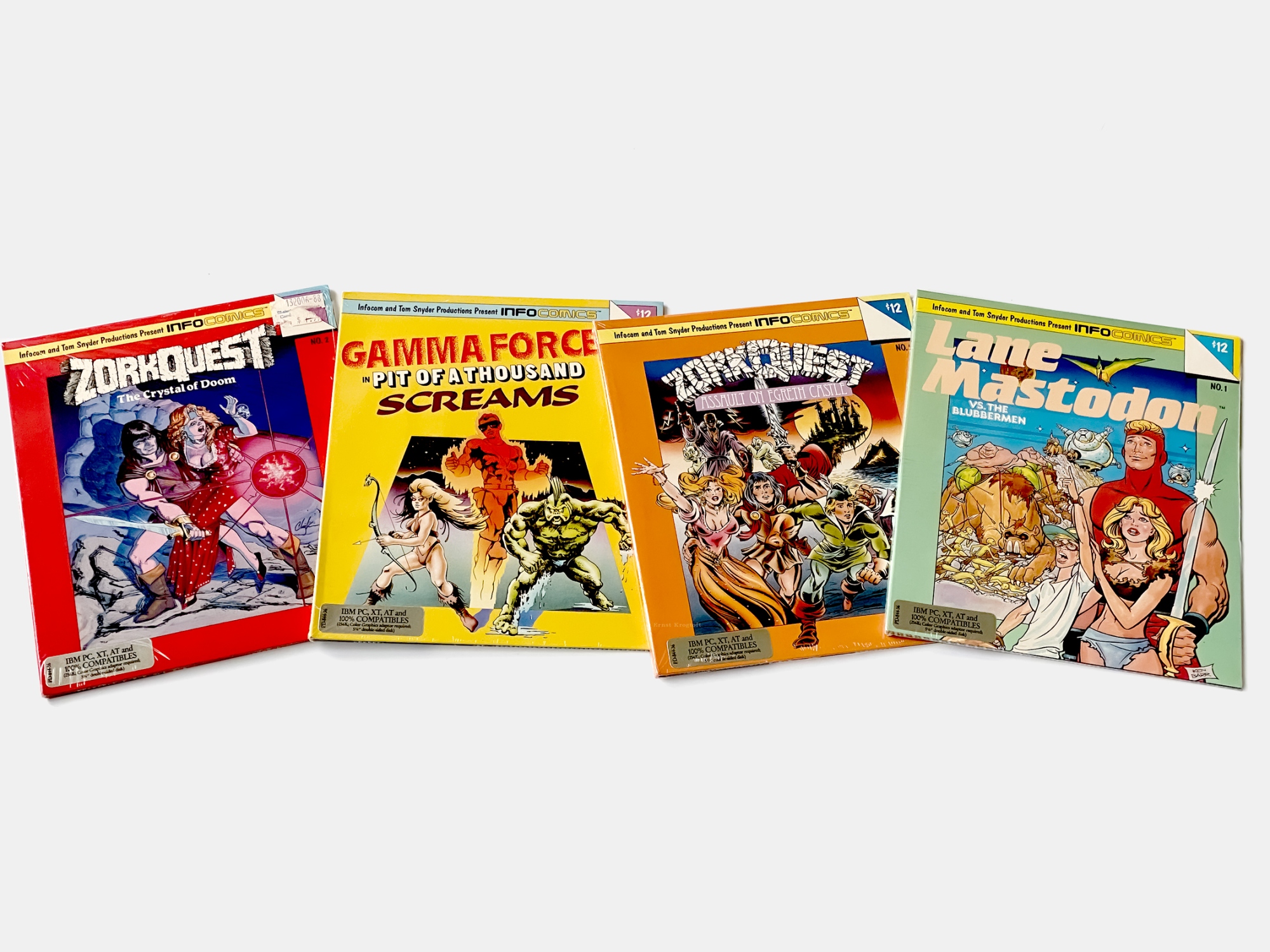 Last week I completed an article on designer and writer Steve Meretzky’s and his time at Legend Entertainment. Here I briefly touched ground on the last years of Infocom as an independent company. A company that came to dominate the adventure game genre for the better part of the ’80s but ultimately failed to adapt to the evolving market. In 1986, giant, Activision had taken over, and with tumultuous times in 1988, a different route was attempted with the release of a small handful of interactive comics called Infocomics.

While the magnificent writers at Infocom had heralded the company to great success and helped establish it as the number one go-to company for interactive fiction, the self-same writers had a part in the challenges the company faced in the latter part of the ’80s. In the field of interactive fiction, there was no need for graphics, or so the writers of Infocom believed, the reality was that the broader audience, the mainstream consumers who were going to buy into adventure games was quickly moving away from text-only games as technology advanced throughout the decade. While most of the designers opposed this change to graphics, marketing and business employees supported it to stay competitive in the genre.

In the mid-’80s, trying to convince customers to stay with text-only games, Infocom did a successful and now famous series of advertisements, mocking graphical adventure games as graffiti compared to the images produced by the imagination of the human brain. While the marketing campaigns were successful and led to other companies releasing their own text adventures, it was a short-lived achievement. Great writing alone clearly wasn’t enough to keep the company’s products attractive. But adding graphics wasn’t that easy.
The company’s success was additionally based on the ability to get each title on every thinkable platform without using vast expenses on writing native code or developing intricate compilers for each system. With the use of an interpreter each title could easily and swiftly be ported as long as the target platform had a Z-machine implementation (virtual machine), but adding graphic support for this method proved a difficult task.

In 1986 Activision acquired Infocom for $7.5 million. A deal that primarily was driven by Activision CEO, Jim Levy, who was a devotee of Infocom’s games and felt the two companies’ experiences with products catering to different audiences would be an advantage in a competitive market. Levy was a music industry executive before joining Activision and helped play an instrumental part in how the company recognized and appreciated its game designers, promoting them as digital rockstars. Levy had an understanding of the creative and skilled work required to make successful games, something his successor, businessman Bruce Davis didn’t. Davis took over as CEO at Activision in 1986 when Levy was outed.
Davis believed that Activision had paid too much for Infocom, which resulted in a filed a lawsuit in an attempt to recoup money from Infocom’s shareholders. Davis required Infocom to up production, developing double as many titles a year, now with a smaller staff and with a required number of these being graphical. Also, he deducted from Infocom’s revenue during the next several years to recover some of the money believed to have been paid too much at the acquisition.
Understandably, Davis first and foremost was a businessman trying to not only turn Activision’s four years of multimillion-dollar losses around but also to find a solid footing for the company’s future in the marketplace. While Davis, in his first year, turned a profit with strong growth in sales his management style led to key people, like Activision co-founder David Crane, leaving for other opportunities.

By 1988, text adventures were nothing more than a small niece genre, catering to a small audience, nonetheless, Infocom kept going at it on top of everything else going on after Davis was put in charge. At some point, Activision realized that the company needed to try a different route, to try and capture Infocom’s earlier heydays and market shares. Developing graphic adventures had become a monumental task involving equally monumental costs, the idea was to create a new type of product, Infocomics, not really games, more animated stories with the only interaction being able to change from which perspective you would follow the plot. These would have low development costs and could be marketed and sold at a budget price, hopefully, driven by the legacy of the Infocom brand.

Gamma Force in Pit of a Thousand Screams, the second title in the Infocomic lineup, released in march of 1988. It featured an original superhero story, co-authored by Amy Briggs, who erlier had written Infocom’s only romantic title, Plundered Hearts

ZorkQuest, the only one to have more than one title in its series. It was based on the Zork universe and written by Elizabeth Langosy, who earlier had done package design and copyright work at Infocom, and Tom Snyder.
Assault on Egreth Castle, the first in the ZorkQuest series, was released in the spring of 1988, its sequel The Crystal of Doom in August the same year

Infocomics, an interesting idea, unfortunately, developed with missed opportunities. The animated series was outsourced and developed by animation studio Tom Snyder Production. The final result resembled a kindergarten picture book, and the technology used was clearly past its due date. The titles did though have a few nifty animations and featured quite impressive vector zooms and pans. The vector format led to a very simple graphic representation but gave a unique style and at a few places looked really great. The Infocomics was released in 1988 for the now aging Commodore 64, the soon-to-be out-of-date Apple II, and for the IBM/PC but in antiquated 4 color CGA. The potential was there, maybe not as a product for adults but as entertainment for kids but with ill-usage of the technology available and somewhat uninteresting writing, it missed its mark – Also there’s something illogical about releasing a more or less non-interactive story on an interactive platform.
When released the Infocomics were ridiculed by critics and consumers swiftly moved on. While more titles were planned, only four titles were released before the concept was canned.

ZorkQuest II – The Crystal of Doom, the 4th in the Infocomic series and the direct sequel to Assault on Egreth Castle.
The only interaction was the ability to chose which plot threads of the different characters to follow when a fold at the top right corner was shown. At any time you could choose to fast forward, skipping stuff you’ve already seen or rewinding to choose a different branch. A bookmark could be placed, as a save game marker.
I played using CGA composite mode, if you had a compatible monitor, this was the best way to experience the Infocomics on the IBM/PC

Rising costs and falling profits, worsened by the lack of successful and new products in 1988 caused Activision to move Infocom development to California in 1989, the once king of interactive fiction became nothing more than a publishing label, before, later that year, Activision closed down the company for good. Some remaining designers including Steve Meretzky moved on to Legend Entertainment, founded by Infocom alumni Bob Bates and Mike Verdu, to continue creating games in the Infocom tradition.