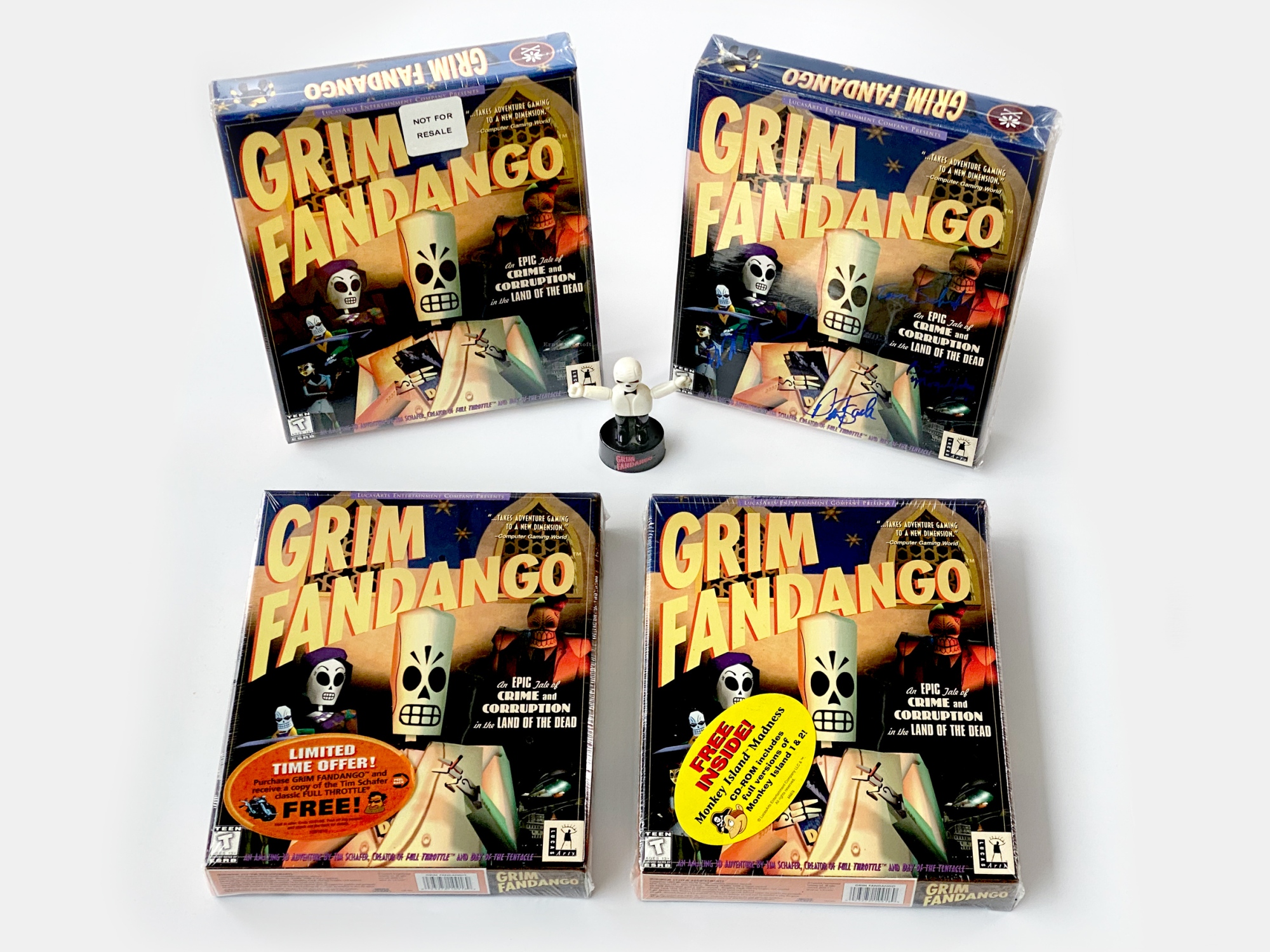 By 1997 the adventure game genre had matured. For two decades it had strived to become the finest in fictional media. In 1984 Roberta Williams and Sierra On-Line had turned the niche genre into hallmark computer gaming when King’s Quest conquered the market and imagination of a generation and paved the way for mainstream digital interactive fiction. Adventure games only got better as the ’80s came to a close and by the early, to mid-90s the golden age of adventure games was upon us. But dark clouds were gathering on the horizon. New genres were on the rise and sales figures couldn’t justify the multimillion-dollar production expenses games required to be competitive in an ever-evolving technological market.
In the last dying breaths of the genre, which had helped players immerse in rich and epic stories for decades, came the best the genre had to offer, and while it made its mark it couldn’t help save it.

When Tim Schafer and David Grossman’s genius and humorous Day of the Tentacle, the sequel to Maniac Mansion, was complete in the spring of 1993, co-designer Schaefer was ready to lead his own project accompanied by his own developed story. LucasArts, aware that the genre had a hard time staying commercially successful, was looking for projects that could offer the company greater financial success than its earlier projects and hopefully, in the process revive the genre in decline.
While we today look back at the Lucasfilm and LucasArts adventure titles with fondness most of them were never commercially successful. Both Monkey Island games considered some of the best adventure games by many, failed financially. LucasArts asked Schafer and Grossman to submit a design document outlining games that the two would plan to develop in the wake of Day of the Tentacle. A prospective on a third entry in the Monkey Island and Maniac Mansion series was proposed but Schafer desiring to lead an upcoming project by himself proceeded to develop concepts separately from Grossman during the summer of 1993.
Schafer pitched five different concepts to LucasArts, one of them being a biker gang-themed game and another being a Mexican afterlife folklore-inspired story. LucasArts wasn’t ready for folklore and went mainstream in the hope to reach the biggest market possible. Schafer’s biker story became Full Throttle, and with a bad-ass protagonist and a much more commercial concept than earlier games Full Throttle, when published in 1995, became the hoped-for commercial success. It would become LucasArts’ biggest commercial adventure game success, selling a million copies in its lifetime.
The initial success allowed Schafer to pursue his film noir ancient Mexican folklore-inspired Land of the Dead story. A story that engulfed a rich epic storyline with extraordinarily memorable characters and with over 8000 lines of arguable some of the best dialogues written for any graphic adventure.

Schafer and lead programmer Bret Mogilefsky early on decided to abandon the SCUMM framework, which had otherwise served all Lucas adventures, except its first title, Labyrinth back in 1986. With 3D being the next big thing, retrofitting SCUMM proved too difficult. Schafer also wanted to fit the game into new consoles like the Nintendo 64 and Sony Playstation, where mouse control wasn’t an option, which led to a tank-style control scheme (think Alone in the Dark).
Mogilefsky had in the early ’90s joined Lucasfilm Games as a game tester and had, as his first assignment, tested Monkey Island. Mogilefsky went away for college and after obtaining a degree in computer science went back to what was now LucasArts and became the lead programmer and engine developer on Schafer’s Grim Fandango. Mogilefsky developed the GrimE engine, using the Sith engine as a base and modelled it very much after the core logical approach of SCUMM.
Peter Chan, Peter Tsacle, and Chris Miles did the beautiful Art Deco Film-Noir inspired concept artwork that evolved into one of the best looking, style-wise, games of the time. The game came with a suiting and a great Spanish/Mexican inspired jazzy score composed by Peter McDonnell along with Mark Griskey and Clint Bajakan of Outlaws fame.
With a new engine, a complex story, a full soundtrack, elaborate dialogues and lipsynching, and numerous artist, scripters, tester, at peak Grim Fandango employed 30 people full-time. A far cry from earlier games, consequently the budget quickly escalated and when the game was complete in 1998 it had cost LucasArts three million dollars.

Grim Fandango was released in late october of 1998 and did well during the 1998 holiday season, selling almost 60.000 copies in the U.S. earning approximately $2.33 million. This copy was one of the copies giving to Lucas employees, hence the not for resale sticker under the shrink wrap

Grim Fandango is the story of Manny Calavera, a soul who has accumulated a bit of dept (sins) in his earlier life and is now working it off in the Land of the Dead, before moving on into the afterlife. Working in the Department of Death as a travel agent for the recently deceased, selling travel packages for their journey to the underworld. But something isn’t right in the department, Manny’s associate Domino Hurley somehow gets all the good souls, and Manny is left with the more unfortunate ones, the ones who have to take the four-year-long soul searching journey due to their poor living choices and therefor won’t qualify for the quick luxury trip. While striving to send his best clients on the Number Nine, the luxurious direct express train, the best Manny yet has accomplished is supplying a soul with a walking stick.
Soon enough Manny discovers that his bad luck on clients isn’t a coincidence and finds himself swirled in a conspiracy of corruption and betrayal. When Manny is threatened to be fired by his boss, Don Copa, if he doesn’t come up with better clients he “borrows” a client from his successful co-worker Domino. The Department computers assign his new stolen client to the four-year journey even though Manny believes, due to her pureness of heart in her life, should have been guaranteed a spot on the Number Nine express train. Manny investigates further and finds that Domino and Don have been rigging the computers, hoarding the luxury tickets for Hector LeMans, the boss of the criminal underworld… What a fantastic story, love it.
Grim Fandango is divided into four acts, each taking place on the Day of the Dead, in four consecutive years. The first being where Manny is employed in the Department of Death…

While Grim Fandango is often referred to as one of the best adventure games of all times, praised for its art design, story and dialogue it didn’t become a huge commercial success (it’s even considered a commercial failure by some but it did manage to meet LucasArts’ expectation and exceeded them internationally), selling around 500.000 copies in its lifetime, half of what Full Throttle did. Even becoming Game of the Year and selected for several other awards couldn’t change the fact that adventure games were on their way out.
Grim Fandango with its unusual theme and being released around the same time as Half-Life and Metal Gear Solid had a hard time making a dent in the mainstream gaming world. It didn’t manage to revive the genre and possibly helped put one of the last nails in a coffin that wouldn’t be opened until many years later when adventure games again slowly began to capture the imagination of new players and old-timers alike.

Grim Fandango was released with a few different advertising stickers on the front, one promoting Full Throttle and the other the first two Monkey Island installments

Schafer left LucasArts shortly after the release of Grim Fandango and went on to create his own company, Double Fine Productions, in 2000. Many of those involved in the development of Grim joined him. Double Fine would in 2015 release a remastered version of Grim Fandango, with a few improvements, It was initially released for Windows, PlayStation 4, PlayStation Vita, OS X, and Linux. Mobile versions for Android and iOS followed in May 2015. A Nintendo Switch port was released in November 2018 and an Xbox One version in October 2020.

While LucasArts proceeded with the development of the 4th adventure title in the Monkey Island saga, and released Escape from Monkey Island, using an upgraded GrimE engine, in 2000. the company cancelled the development of sequels to Sam & Max Hit the Road and Full Throttle stating that “After careful evaluation of current market place realities and underlying economic considerations, we’ve decided that this was not the appropriate time to launch a graphic adventure on the PC. Escape from Monkey Island became the last original adventure game to leave the factory floor of LucasArts.