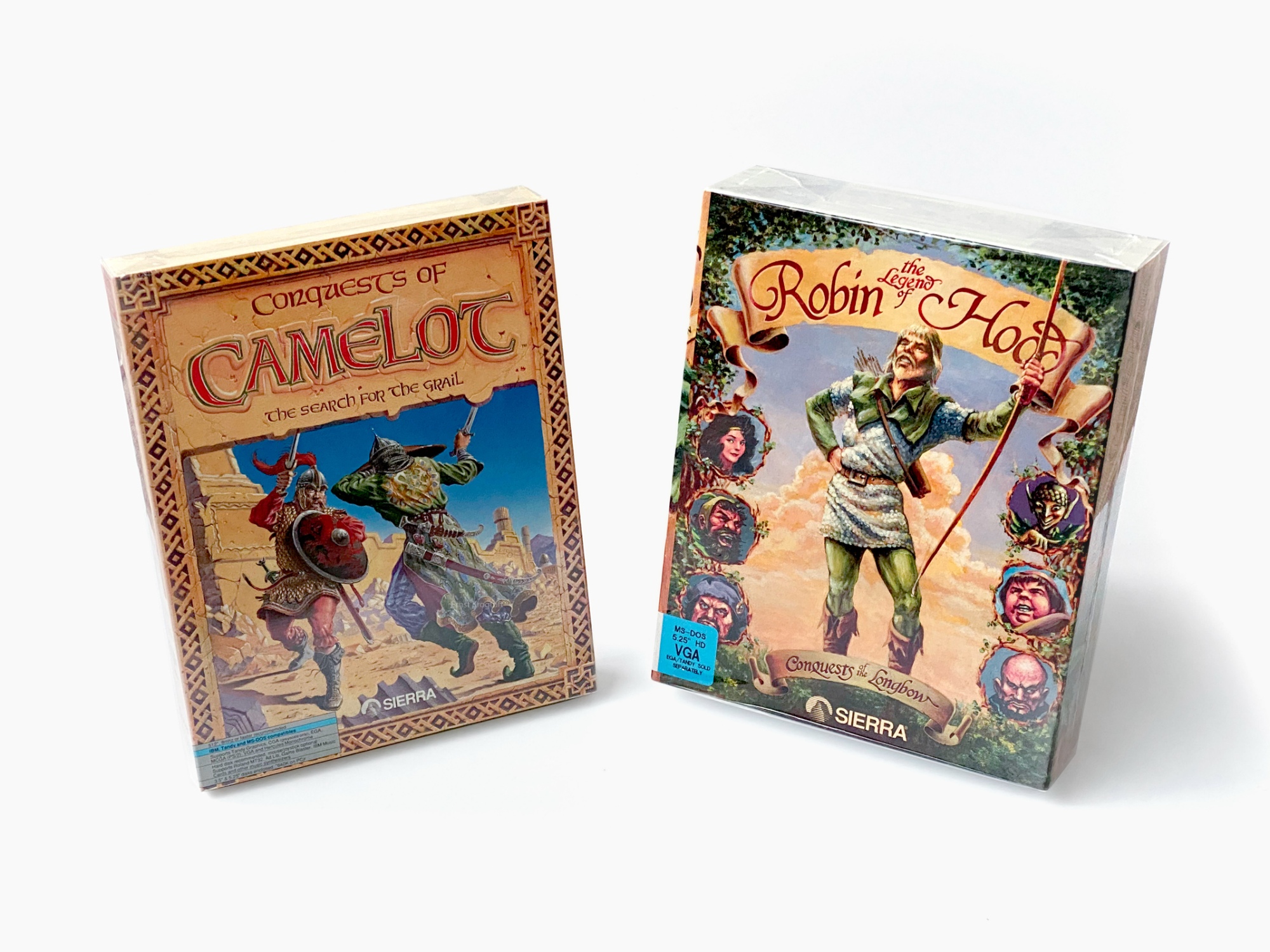 Among Sierra On-Line’s successful worlds of fairytale knights, space janitors, and lounge lizards the company synonymous with the adventure game had no titles that tapped into already established folklore and mythical tales. That would change when a female writer with no prior experience in computer game development wrote and designed two “lesser-known” adventure games, both became praised and loved for their storytelling, craftsmanship, and charm. Thw two titles finally brought legends and folklore to Sierra On-Line’s ever-growing portfolio of adventure games.

It started with a phone call in 1988 when Ken and Roberta Williams‘ Sierra On-Line, looking for new talent, called renowned Australian artist and illustrator Peter Ledger, who at the time was living in the Los Angeles area with his wife Christy Marx.
A decade earlier, in 1979, Ledger had briefly met Marx at a Comic Art Professional Society meeting in Los Angeles. They were immediately drawn to each other but Ledger, at the time married, was heading back home to Australia. Two years passed before Ledger, in 1981, returned to the US to work on a project funded by George Lucas and film producer Gary Kurtz. Ledger met up with Marx and yet again sparks flew. After a year together in the city of angels, the two briefly moved to Australia for Ledger to complete his divorce before returning to the US and in 1983 got married on beautiful Catalina Island, off the coast of Los Angeles.

While Marx, through the ’80s had success with her screenwriting on G.I. Joe: A Real American Hero and as head writer and developer on Jem and the Holograms, the 1988 Hollywood writers strike, the longest in Hollywood history, left Marx without work for months on end. One day, out of the blue, the phone rang, the call was from a software company called Sierra On-Line, looking for artists to join the Sierra family and asking for Ledger. Marx, down on luck with work, used the unforeseen opportunity and asked if Sierra also needed any writers…

While Sierra’s and especially Roberta’s adventure games were highly successful, numerous people over the years had asked for the company to do games based on legends and tales, one of the requests being the story of King Arthur. Such a game would either require a designer with comprehensive knowledge on the subject and those were non-existent in small-town Oakhurst or somebody with a passion for fantasy, who was willing to do extensive research. When Ken and Roberta met with Ledger and Marx they were familiar with Ledger’s artistic skills but only then learned of Marx’s extensive scripting background for cartoons and television. All of that paired with the couple’s interest in lore and myths made them a perfect team and were hired to do a game that tapped into the classic Arthurian mythology.

In 1988 the couple moved to Oakhurst but as neither Marx nor Ledger knew anything about computers or games for that matter, the couple spent the first months playing adventure games, talking to programmers, and artists, and doing extensive research on the subject.
The couple slowly started working on their first game, Conquest of Camelot with the subtitle The search for the Grail, with Marx as director and writer and Ledger as the artist. While Marx quickly adapted to the new medium, learning as she went along, her husband found it, as an artist, frustrating to work with the very limited number of colors and the relatively low resolution. Nonetheless, Ledger, in 16 colors EGA managed to create a very detailed and beautiful captivating atmosphere, with rich and vivid backgrounds and characters.
Every aspect of the game, its story, and dialogue shows extensive research, and Marx’s passion for fantasy, emotion, and strong female characters shines through.
Conquest of Camelot was developed in the first version of the Sierra Creative Interpreter (SCI0) which allowed for 320 by 200 graphics and 16 color EGA, a music-card compatible soundtrack, and mouse control but still text-parser driven.

Cristy Marx’s first-ever computer game, Conquest of the Camelot: The Search for the Grail published in very early 1990 for IBM/PC and later the same year for the two other major platforms at the time, the Commodore Amiga and the Atari ST.
Peter Ledger, Marx’s husband, did the beautiful in-game EGA artwork and the artwork on the packaging

Conquest of the Camelot won “Best Computer Adventure game” in 1990, by Video Games and Computer Entertainment Magazine but while being praised for its craftsmanship, story, charm, and visuals it did arrive at a time when the market was shifting, leaving text parser-driven games behind. Not only was King’s Quest V released the same year, as the first true Sierra point and click adventure game, now with beautiful and impressive 256 color VGA graphics, the competition also showed its fierce face the same year with Lucasfilm Games releasing titles like Loom and The Secret of Monkey Island.

While Marx, throughout the development, slowly adapted from her earlier linear writings to the non-linear approach a game required, Ledger had a harder time. Computers as a tool for creating art never managed to capture his heart and he left Sierra after the completion of Conquest of Camelot. He continued to do traditional art while still producing artwork for a few games in the coming years, among them Blue Force by former Police Quest designer Jim Walls.
Marx stayed with Sierra and started writing her next game using essentially the same formula as before. Initially, she wanted to touch on Greek mythology but with several Robin Hood movies in the making, it made sense to tap into the renewed interest the movies were generating.
The Legend of Robin Hood: Conquest of the Longbow was completed and published in 1991, using the newest Sierra Creative Interpreter (SCI1) which allowed for a point and click interface with better graphics, and sound that could compete with the ever-increasing competition from not only Sierra’s own successful titles but also by numerous of games from other developers.

Robin Hood: Conquest of the Longbow, Marx’s followup to Camelot. Released for the IBM/PC in 1991. Amiga owners could enjoy it a year later

Like Camelot, Conquest of the Longbow differed from the traditional adventure game by diminishing the traditional inventory-based puzzles in favor of solving riddles, exploration, and by completing different tasks. Both games included several arcade sequences, which made the games stand out from the crowd. Conquest of the Longbow was reviewed as one of the best adventure games of 1991, and even won “Best Adventure Game of the Year” by a couple of magazines.

After finishing Conquest of the Longbow, Marx left Sierra and game development, returning to write for television and animations. Marx and Ledger continued to live in Oakhurst, enjoying the creative life and beautiful scenery, sadly lightning struck on a November night in 1994 when Ledger’s car was broadsided by a semitrailer instantly killing him – Ledger is buried in the small, historic cemetery in Oakhurst.

Marx returned to Sierra in the latter part of the ’90s and joined the design team working on what would become an unreleased Babylon 5 space combat simulator. Here she met writer Randy Littlejohn to whom she later married. At this point in time the Sierra everybody loved was merely a ghost of its former self, gone were Ken and Roberta Williams and the company was heading through tumultuous reconstruction phases. In 1998 Marx, for the final time, left the company where she had started her game writing career a decade earlier. She continued to write and later returned to game design.

Conquest of the Camelot – The Search for the Grail
Centerfold scan from Sierra News Magazine Vol. 3 No. 1 – Spring 1990 – 10th Anniversary
The poster can be downloaded in 600 dpi here – 130MB PNG