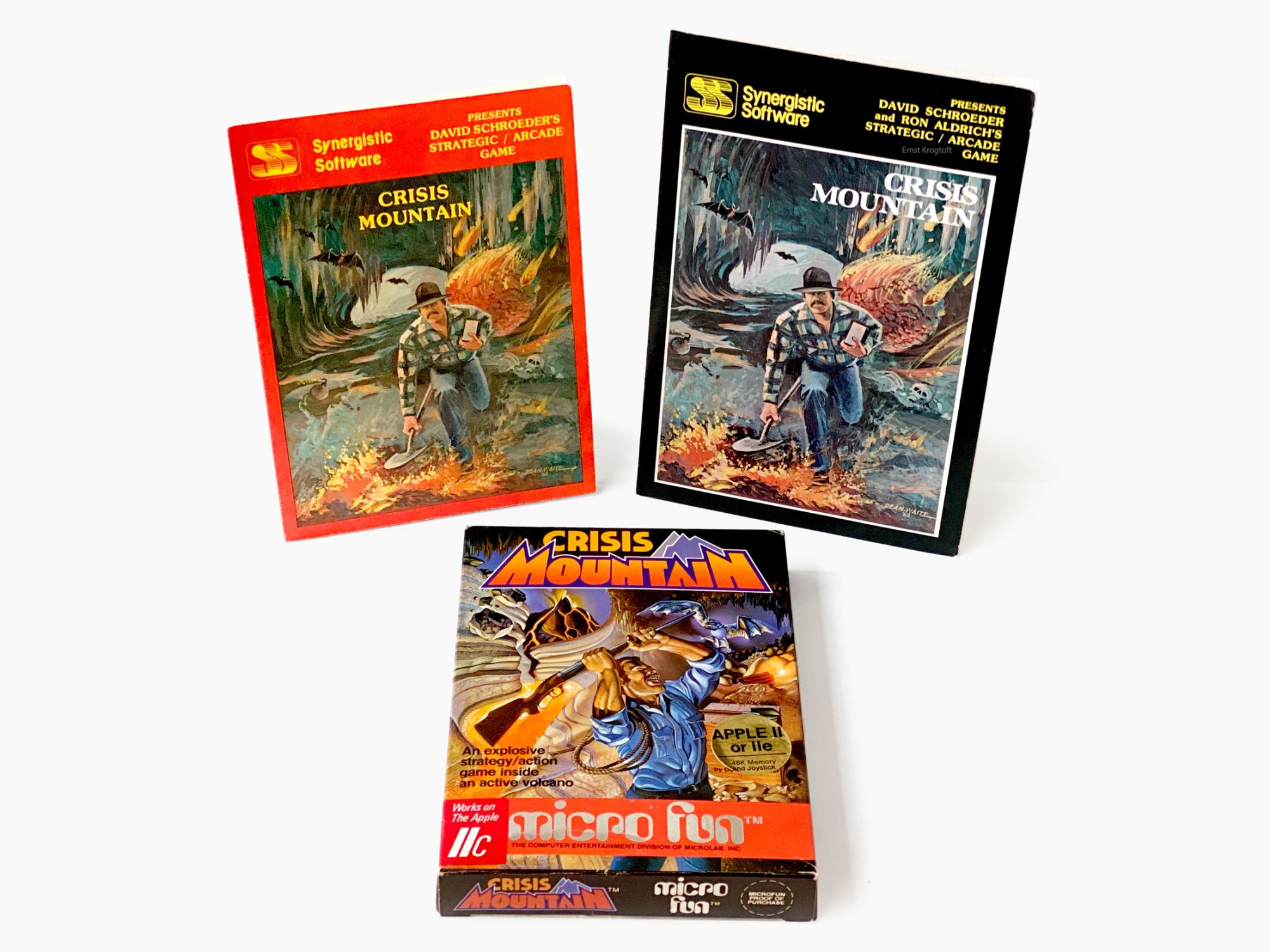 A game published for the Apple II and Atari 8-bit in 1982 was written by a man who had never written a game on a microcomputer before, he didn’t even have a computer and yet the game became highly regarded for its blend of fast-paced action, strategic thinking, and excellent programming.

In 1976, David Schroeder, a junior at Yale University, took his first and only computer course, utilizing the university’s newly installed Digital Equipment PDP-11 minicomputer. Schroeder and his creative mind soon turned every programming assignment into game experiments. This, to much distaste of his computer science teacher, resulted in a “D”, the worst grade he ever had gotten. A year later, in 1977, with the computer class being just a faint memory, Schroeder majored in music from Pierson College, one of the 14 residential colleges at Yale University.
For the next four years, Schroeder didn’t give computers or games many thoughts. He had ended up in the Seattle area where his first attempts at a post-graduate career were failing. Working temporary jobs and strolling around he stumbled upon something captivating. An encounter that would shape the next 10 years of Schroeder’s life.

In the late ’70s and early ’80s, the ever-increasing popularity of video arcade games resulted in machines popping up in every thinkable location. While their finest task was to gobble up quarters, the work involved with game development was nevertheless very much a labor of creativity, fitting well with Schroeder’s mindset. Especially one game had caught his attention, Nintendo’s Donkey Kong. Finally, a game that had a recognizable character and wasn’t played out in space. The protagonist’s struggle to save the damsel in distress was a relatable classic. The small and unnamed character, initially just known as Jumpman and later Mario, would over the next 40 years become the very symbol of video and computer games. Schroeder’s Donkey Kong encounter soon turned his mind back to his computer science class, his dissatisfied teacher, and his enjoyment of experimenting with game development. Was it possible to recreate the thrills he had experienced in arcades and bring something like Donkey Kong into people’s homes?
At the time Schroeder couldn’t afford his own computer, in fact, he had never owned one. Fortunately, the nearby Seattle Central Community College had adopted the Apple II microcomputer for their computer courses. In 1981 Schroeder signed up for a study course and was granted access not only to the computers but also to a vast amount of documentation. In the time following, Schroeder learned himself every bit there was to know about the Apple II and how to program it, all while trying to recreate Donkey Kong in his own way.
After experiments with Applesoft BASIC, it became clear that only with 6502 machine code was he able to achieve the fast and smooth gameplay he admired from the arcade. It would take the better part of a year before his first creation was complete, a noteworthy feat considering he never had programmed on a microcomputer before and had to commute to the local community college just to get close to one.

In 1982 with Schroeder’s game nearing completion he started looking for a publisher. From the numerous ads in the various magazines of the time, he came to know of Robert Clardy’s Synergistic Software, a local Seattle-based software company.

Synergistic Software quickly responded and a publishing deal was agreed upon. Schroeder’s game was published for the Apple II in 1982 as Crisis Mountain.

Crisis Mountain, published for the Apple II in 1982 by Robert Clardy’s Synergistic Software.
The cover art was done by Dean Waite an artist and illustrator who created covers for a small handful of Synergistic titles

While Crisis Mountain was inspired by Donkey Kong it was still very much its own unique game. The task was to dig up and defuse several randomly timed nuclear bombs left by terrorists in the caverns of a dormant volcano in the Pacific Northwest and thereby save the Western hemisphere from an impending nuclear disaster. Rolling boulders, fiery lava pits, and Bertrum the deadly bat were some of the numerous hazards to be avoided while picking your route through the cavern.
Points were awarded for gathering loot and items left by the terrorists. Jumping boulders also added to your points. The larger the boulders, the more points you received. If hit by boulders your strength was reduced. The strength level was indicated from one to three. When weakened, your point-scoring abilities were significantly impaired. At strength level one, scoring became secondary to mere survival. Safe places, where you could regenerate your strength were located around the cavern.
Crisis Mountain had nine levels in total. Advancing from one to the next challenged you with more bombs and less time to defuse them. Picking the appropriate route through the cavern became more and more critical as you would progress.

A “new release” advertisement from Synergistic Software from the Autumn of 1982, showcasing David Schroeder’s Crisis Mountain for the Apple II

While the nature of coin-op games was to eat your quarters at an alarming rate, the faster you were killed the faster the coin collector was being filled, often resulting in a frustrating experience. This trait was often carried over to video and computer games. Crisis Mountain was one of the first if not the first action game to introduce the ability to regenerate the player’s health (though called strength here). This not only led to a more enjoyable experience but also imposed a unique challenge where you as the player had to choose wisely to regenerate at the cost of time available to defuse the bombs.

The Apple II version looked and played great and while challenging it can still be enjoyed today.
You can give a spin on Internet Archive here

Crisis Mountain was initially released for the Apple II in 1982 and reviewed as a thoroughly entertaining game and a superior programming achievement. It was praised as an action game that not only required quick reflexes but also strategic thinking. With reasonable sales, for a game from an unknown author, royalties commenced and Schroeder finally had the means to leave behind the computers at the community college and purchase his own personal computer, an Apple II Plus.

Schroeder’s game was converted by Ron Aldrich for the Atari 8-bit and released in 1982 as well. Aldrich had earlier developed a few utility software titles and the Centipede clone Nightmare Gallery for Synergistic Software.

Confronted with the harsh economic situation most software houses faced in 1983 with the “North American Video Game Crash”, Robert Clardy decided to concentrate exclusively on the development of new software titles and negotiated with other publishers to ensure the distribution of the company’s already existing titles. Schroeder’s Crisis Mountain was picked up by MicroLab and distributed under its Micro Fun label.

In 1983 Synergistic Software started to focus solely on new software development and negotiated with other publishers for them to continually publish already existing titles. Crisis Mountain was picked up by MicroLab and published under its Micro Fun label the same year

Crisis Mountain was licensed to Creative Software and converted to the Commodore 64 in 1983 by Lloyd D. Ollmann Jr.

After the release of Crisis Mountain, Schroeder went on to create his next game, Dino Eggs, now on his own personal computer. Dino Eggs was released in 1983 and was unlike Crisis Mountain only published by MicroLab, under the Micro Fun label, but I’ll cover that in a future article dedicated to MicroLab.

2 thoughts on “Bits From my Personal Collection – Crisis Mountain, a perfect first game”