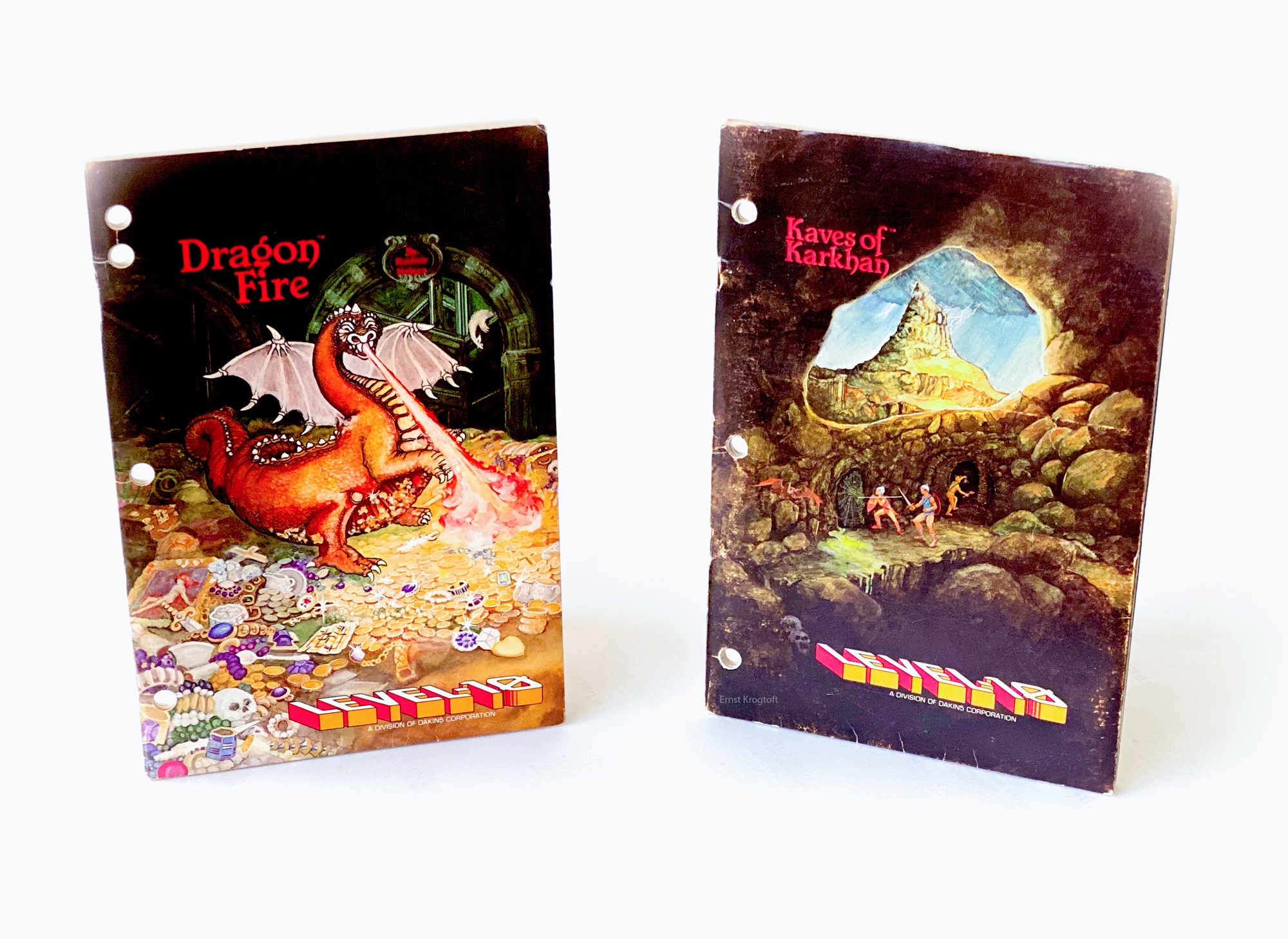 Recently I did a small article on David Daring’s Reign of the Red Dragon, a fantasy RPG published by Adventure International in 1981, as I was doing research I ended up playing some of the early dungeon crawl titles in my collection. One of the games that stood out was Rodney Nelsen’s 1981 title Dragon Fire. As I did a bit of digging I came across W. Clarke’s absolutely excellent review on the Call-A.P.P.LE. website, a review that inspired me to do this small article.

While some of the earliest games, like Ultima and Wizardry, went on to establish million dollar franchises, others would go on to herald genres into the mainstream, most came and went, only to be forgotten for decades to come. In the last couple of decades, the interest in archiving and saving the software heritage together with collectors like myself have spun a renewed interest in not just the recognizable and popular titles but also in the obscure, the commercial failures, and in the downright poor.

In 1981, Denver-based Darkin5 Corporation, publisher of microcomputer business and utility software, would create a new division to try and tap into the very lucrative software entertainment market, that was rapidly on the rise. Level-10, as the new division was named, would publish Rodney Nelsen’s fantasy RPG Dragon Fire as its very first title. (It’s unknown if the Level-10 name derived from the number of levels Nelsen’s game had).

Nelsen had in early 1979 created Super Dungeon one of the earliest microcomputer role-playing dungeon crawlers. The game was published by Programma International, the biggest publisher of microcomputer software in the late ’70s. Super Dungeon featured, like Dungeon Campaign and other early titles in the genre, randomly generated mazes for you to explore in the hunt for treasures all while combating monsters of varied nature (most inspired or copied from the Dungeons & Dragons universe). Super Dungeon featured five different character types, Warrior, Wizard, Elf, Dwarf, and Hobbit each with their own strengths and weaknesses. Each character type was given random attributes made up of Constitution, Strength, Life Point, Armor, and Speed, all of which could be complimented at the beginning of the game when equipping your chosen character with weapons, armor, and various other items. Items throughout the game could be collected to further compliment your stats.
Super Dungeon had no specific end goal other than to clear all 20 levels and exit the dungeons with as much gold as possible.

In 1980, Nelsen reworked Super Dungeon, with an added story and with the Hobbit character yielding for a new type, the Huntress. While the game on the surface looks and plays almost identical to Super Dungeon with the same very rudimentary low-res graphics, with a top-down perspective when traveling the mazes, each room now had a description to further spark the player’s imagination, very much like what a dungeon master would do in a regular Dungeons & Dragons tabletop session. Temple of Apshai from 1979 also had used room descriptions but these were all given in the accompanying manual (Book of Lore).

Rod Nelsen’s Dragon Fire, published by Level-10/Darkin5 in 1981 and only released for the Apple II

The very simplistic graphics in Super Dungeon when engaging in combat was changed to be solely text, which in my book leaves more to the imagination. Dragon Fire consisted of 10 levels with 170 different enemies and over 150 rooms and treasures. The goal was to reach the lair of the dragon and defeat it.

The game came with a 32 page illustrated and very impressive manual, that not only would introduce you to the game and its mechanics it would also in great detail describe the different character types.

Dragon Fire came with an elaborate 32-page manual written by renowned author Steve Rasnic Tem. Most of the in-game text from Super Dungeon was transferred to Dragon Fire’s manual, accompanied by great illustrations

My recent sitdown with Dragon Fire along with my 8-year-old son rendered me quite surprised by how approachable this 40-year-old game was. While all of the earliest role-playing dungeon crawlers play vastly different than what the cRPG genre later would evolve into, Dragon Fire still felt right. Everything was well described on-screen and the ingenious use of random room descriptions really fueled the imagination. The dungeon crawl was as good as any of the early titles. Combat made sense and when on higher levels you would not only encounter high-level enemies and an inescapable death but also low-level tier which could easily be beaten and aiding to your stats.

Dragon Fire was rated number 5 in the fantasy genre in the Softalk Reader’s Poll of the most popular software of 1981.

Nelsen completed development in late 1980 and started working on a “sequel” while Level-10 was selling Dragon Fire throughout 1981.
In September of 1981, the “sequel” Kaves of Karkhan was complete. It’s unclear to me why this was announced and marketed as a sequel, other than the facts it might have helped sell the game. Kaves of Karkhan played nothing like its predecessor, the top-down perspective of the maces was changed to a quite impressive 1st person perspective, maybe inspired by Richard Garriott’s Akalabeth. The game looked quite good and the animation when moving around was impressive though very slow. Unfortunately, the game played like a 1st person dungeon Crawler text adventure without any real RPG elements, or at least without any of the elements that make an RPG fun and engaging (leveling up, etc.). All commands besides movement were now verbs and nouns, like the text adventure games of the time.
The story takes directly off after you have defeated the evil dragon in Dragon Fire and features the same characters. Your chosen hero character would be accompanied by a party of 10 chosen side-characters, each with an item in their inventory to prevail different and at times obscure obstacles along your journey. The mazes were randomly generated but it was almost impossible to get a heading of where you were going and where you had been – You would pass something going one way, later it would be gone when passing the other way.

Kaves of Karkhan was like it’s predecessor only released for the Apple II. The best part of the game was the extensive manual

While the cRPG genre in 1981 was still trying to find its footing and direction, with games experimenting with different mechanics and elements, Dragon Fire did just as many things right as Kaves of Karkhan did wrong. Kaves of Karkhan was still an interesting yet obscure blend of the adventure and role-playing genre and comes to show how a mix match of inspiration and experimentation would come together in the early ’80s.

While it makes sense that Kaves of Karkhan with its experimental mechanics and wretched gameplay quickly faded into obscurity, Dragon Fire while being a simple but yet fun and engaging game succumbed to games like Ultima and Wizardy, both of which would set the course of the role-playing genre for years if not decades to come. It’s unknown how many copies Level-10’s two first games managed to sell but it’s likely to be less than a few thousand.

The 3d engine used in Kaves of Karkhan was later used in Level-10’s Alkemstone, a game just as obscure as the game it derived its game engine from. Gene Carr the CEO of Darkin5 marketed the game with a cash prize of $5000 to the person who would complete all the puzzles and thereby gets clues to the whereabouts of a hidden physical Alkemstone. Even after Carr upped the prize to $7.500 nobody managed to solve the game… maybe the real Alkemstone is still residing in its original hiding place. Carr’s marketing effort in trying to get more people to buy the game didn’t work out and Level-10 went defunct in 1982 after on 6 released titles…but that’s all for a future article.

Alkemstone, a title that would use the 3D engine from Kaves of Karkhan. Released in late 1981 for the Apple II

All of Level-10’s games alongside the company quickly went into obscurity only to be rediscovered decades later, now curated by archivist and collectors, as items that help tell the story of the personal computer game.