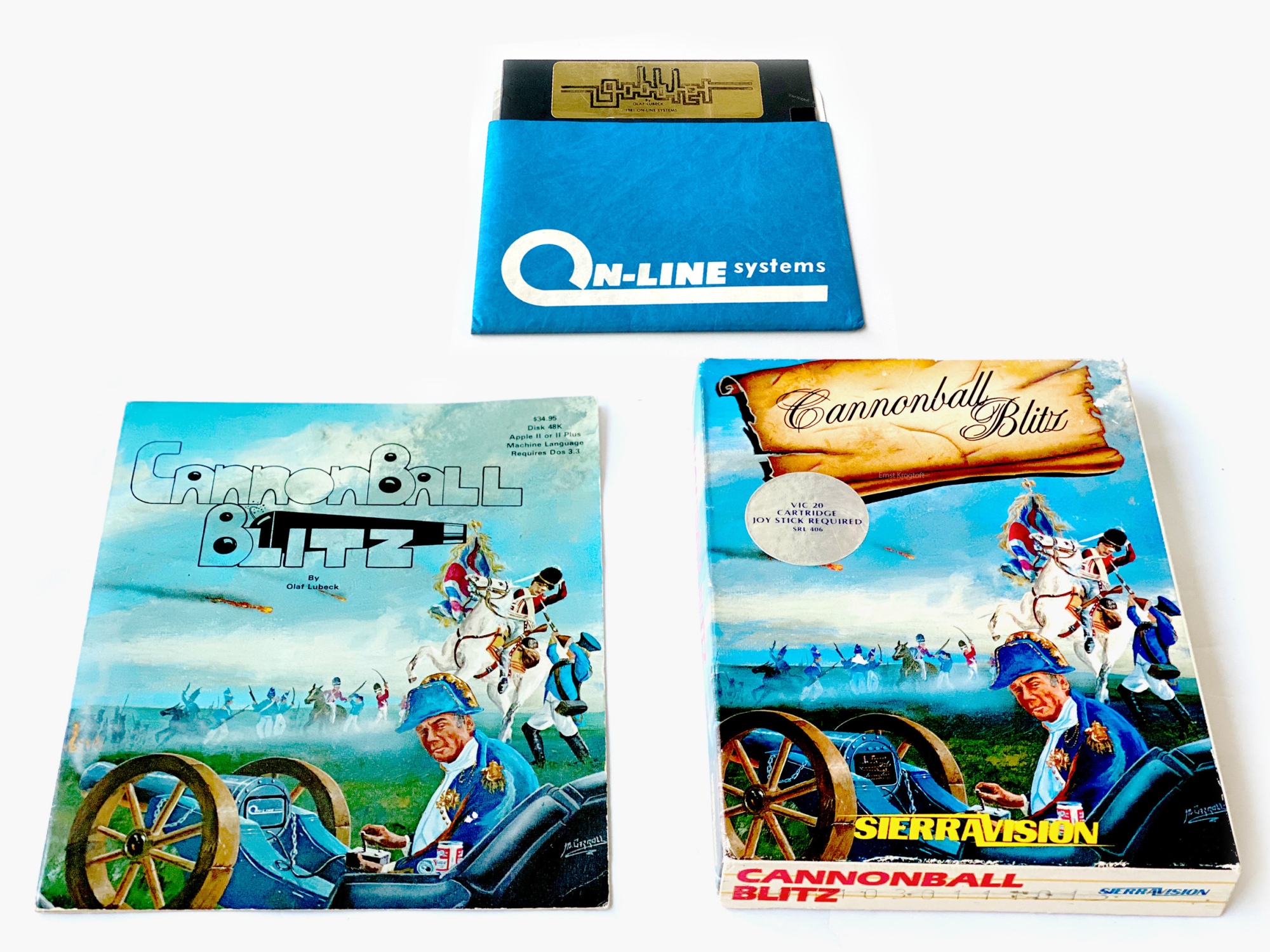 While Olaf Lubeck’s two titles Gobbler and Cannonball Blitz might appear to be yet another two clones in a market full of clones they both have interesting places in early gaming history. This was a murky time with no distinct line between what was legal and what was downright copyright infringement. Gobbler catapulted Ken Williams’ On-Line Systems into legal battles with the biggest player in the computer entertainment industry. A battle that ultimately would set the precedence for future clones, clones like Cannonball Blitz, released in the wake of the battle.

In 1981 Ken Williams of On-Line Systems put out advertisements in magazines, searching for new developers to further expand the company’s portfolio of games. The ad simply read, with bold letters, “AUTHORS WANTED” and below listing the perks of working with On-Line Systems. Including “I (Ken) will personally be available at any time for technical discussions, helping to debug, brainstorming, etc.“.

One who saw the ad was Pam Lubeck, wife of professional scientific programmer Oluf Lubeck. Lubeck had, in 1981, on his Apple II computer, created clones of two video arcade games. Lubeck responded to Williams’s ad and mailed in his two creations. Promptly Williams contacted Lubeck showing interest in one of the games. The two agreed on a publishing deal and Lubeck’s Pac-Man clone, Gobbler was published for the Apple II the same year.
The game ended up doing quite good, selling just shy of a thousand copies a month. But by becoming successful and also being superior to most other Pac-Man clones, the title soon got Atari’s attention. In the late ’70s, Atari had acquired the rights to produce home versions of Namco’s arcade hit. Atari which yet had to release its official port for its Atari 2600 home video console (the game would be developed throughout 1981 but didn’t see release until the spring of 1982) soon claimed copyrights infringement. Gobbler, by request from Atari, ended up being pulled after just 5 months on the market.
The Atari 2600 release of Pac-Man became the best selling video game, with an estimated 7 million copies sold.

John Harris, another programmer, who responded to On-Line Systems’ search for new developers had also done a Pac-Man clone but with the legal actions On-Line Systems faced with Atari, Williams wouldn’t take any chances and had Harris change elements of his game. The layout of the maze was changed, a candy theme added alongside new graphics and animations. With Williams satisfied On-Line Systems released the game for the Atari 8-bit line of home computers as Jawbreaker in 1981, essentially replacing Lubeck’s Gobbler.

With Gobbler off the market, but by being replaced by another title, using the same game mechanics as Pac-Man, and even released for Atari’s own line of home computers, clearly wasn’t too satisfactory for Atari.
Atari Corporation had at the time started threatening legal action against several companies that were producing software similar to those of which Atari would hold patents and licenses for.
Atari approached On-Line Systems with the choice of getting sued or letting Atari take over Jawbreaker and market it under the Atari name. Initially, Atari managed to obtain a temporary restraining order in the U.S. District Court for the Eastern District of California in Fresno prohibiting On-Line Systems from producing or selling Gobbler and Jawbreaker. On-Line Systems filed an antitrust suit, stating that Atari was trying to monopolize any game featuring a maze and dots. Atari countersued and arcade manufacturer Midway joined the fight. Eventually, both the Atari and Midway infringement claims were tossed out of court, appealed, and then dismissed again. The parties settled out of court, and copyright law concerning computer games was firmly established as protecting not the mere idea but the specific execution of that idea – in this case protecting the Pac-Man name and its characters but not the gameplay and mechanics.

Meanwhile, the smoke from the legal battle was starting to dissipate, and Lubeck went on to port Harris’ Jawbreaker for the Apple II. The Apple II version became quite successful and started earning Lubeck royalties. Finally starting to see his programming work paying off, Lubeck went on to create Red Alert, published by Brøderbund and Pegasus II, published by On-Line Systems, both in 1981. Pegasus II was one of the very first computer games to feature a built-in level editor, a feature Lode Runner a few years later would popularize. Pegasus II’s level editor would become one of the key inspiration to a young John Romero, who, of course, later in life would become one of the most prolific game developers.

After the release of Gobbler, Lubeck created the two action titles Red Alert and Pegasus II, both for the Apple II and released in 1981. Pegasus was picked up by On-Line Systems and Red Alert by Brøderbund

With the notion that computer game ideas and mechanics couldn’t be copyrighted On-Line Systems, in the wake of its legal battles, had no hesitation publishing Lubeck’s newest game, Cannonball Blitz, a clone of Nintendo’s 1981 hugely successful video arcade game Donkey Kong, in 1982.
-Donkey Kong experienced its own copyright infringement claim. Universal Studios went on to sue Nintendo, claiming that the video game was a trademark infringement of its King Kong name and character. The case was dismissed, the court held that Universal had no rights to the name King Kong, the characters, or story and that there was no possibility for consumers to confuse Nintendo’s game and characters with the King Kong movies and its characters.

Cannonball Blitz was conceived in Lubeck’s spare time, when not working at the Los Alamos National Labs. While the game played very much like the game it copied it did bring a few new additions.

Cannonball Castle, fortress of the enemy redcoats, sits high atop Nutcracker Hill. It is your mission, as a rebel soldier, to climb Nutcracker Hill and destroy the castle. Not so fast though – there are many traps and obstacles designed solely for your elimination. Rough terrain and enemy troops are bent on your destruction, and a constant rain of cannonballs could cause a fatally large headache. Many men before you have tried and failed, so it’s all up to you… Cannonball Blitz is an exciting new arcade game that will have you climbing the walls (the walls of Cannonball Castle) over and over again.”

From the backcover of the game

Cannonball Blitz was reviewed as fun but at times frustrating and difficult. It was later, in 1983, released under On-Line Systems’ now Sierra On-Line‘s short-lived action/arcade label, SierraVision.

When released in 1983 for the Commodore VIC-20, On-Line Systems had been renamed
to Sierra On-Line, its action/arcade games would now be published under the shortlived SierraVision label

While On-Line Systems, ever since its inception, had been publishing action games, the company was first and foremost known for its hugely successful Hi-Res Adventure series. In 1982 On-Line Systems changed its name to Sierra On-Line, dedicated to the company’s new location in Oakhurst, California, in the foothills of the Sierra Nevada mountain range. SierraVision alongside SierraVenture and the Sierra Business Products division was Sierra’s attempt to have dedicated labels for its growing and diverse line of software products. SierraVision was dedicated to tapping into the lucrative action/arcade market but the high production cost of cartridges, the North American video game crash of 1983, and the rapid speed of technological advancements left Sierra in need of a regroup…but that’s for a future article.