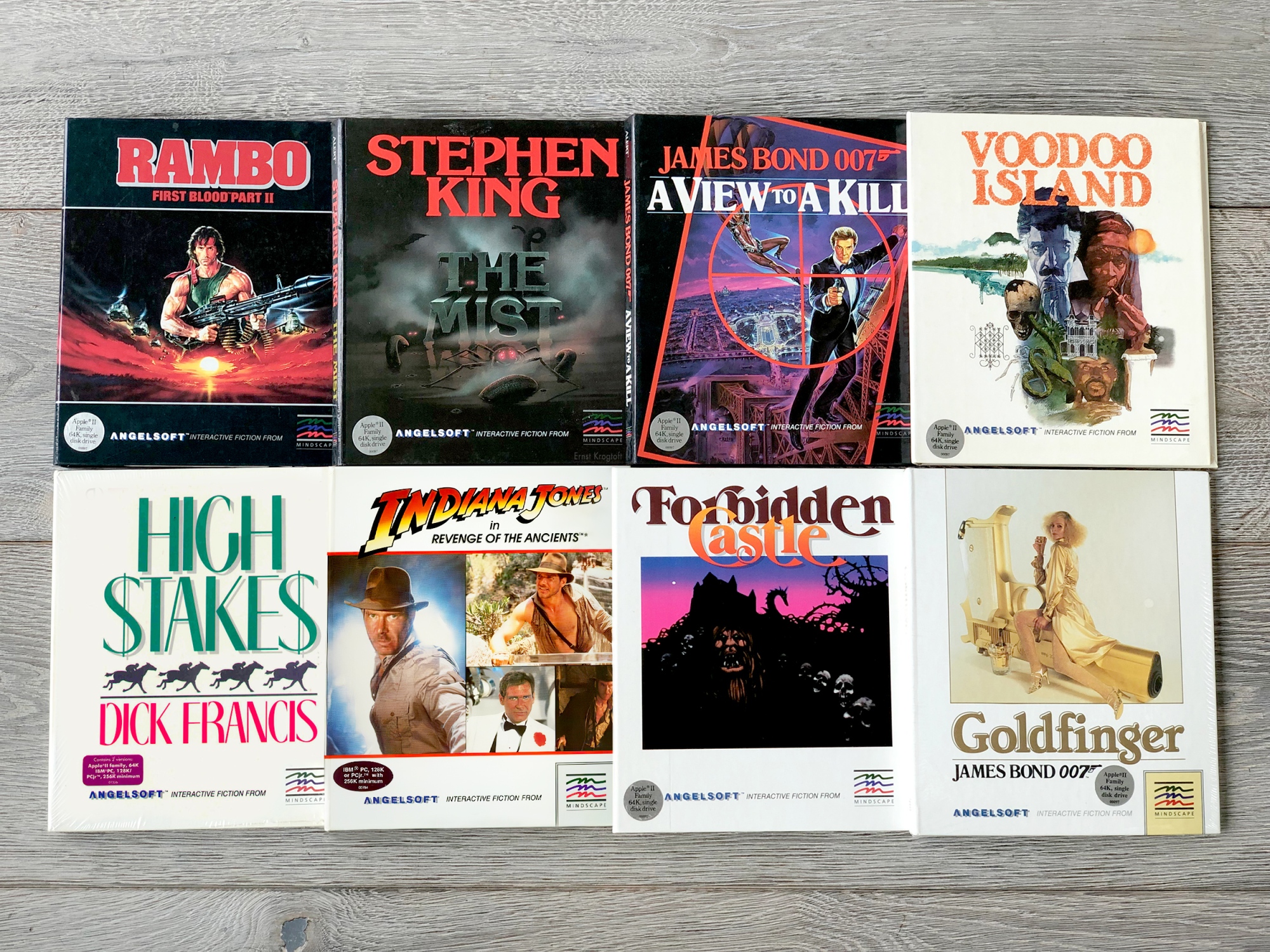 I’m in the process of writing a bigger article about Mindscape, one of the larger videogame developer and publisher of the ’80 – but since that article is more of a greater overview of Mindscape, I thought I would do a small article and dive a bit deeper into one of the lesser-known companies that had its titles published by Mindscape.

In the early and mid-’80s, text-based adventures had their heyday, with companies like Infocom and Adventure International ruling the adventure scene.
The text-based adventure dates all the way back to the mainframe days where Colossal Cave Adventure had tech students and specialist enjoying and craving for this new way of making storytelling interactive – Colossal Cave wasn’t for the casual gamer, the term casual gamer of course didn’t exist at that time, it was for the few “geeks” who was fascinated with this new digital world and who also happened to have access to a mainframe terminal.
As the personal computer started to emerge in peoples homes in the late ’70s and early ’80s there was an indictment for developers and publishers to try and reach the potential “casual” adventure gamer by making the interactive fiction more accessible, the adventure type gamer usually didn’t have the same computer know-how as the hobbyist who not only were playing the hottest arcade games at the time but also enjoyed exploring the world of computers – Also developers and publishers needed to find arguments to favorably distinguish adventure games from the competition and try to reach new potential customers. A new discourse emerges emphasizing the intellectual aspect of adventure games as opposed to the fast-paced and sometimes brainless challenges of arcade games.
Infocom, as mentioned earlier, was one of the major developers and publishers of adventure games in the first half of the ’80s, and a forerunner in elaborating another aspect of this discourse; adventure games shouldn’t be seen as a typical computer game but more as a new form of interactive literature. To emphasize this orientation, the company adopted the label “interactive fiction” to better describe their adventure games, in the spring 1984 edition of their newsletter The New Zork Times.
Once established as a narrative drive, adventure games quickly became a convenient gateway to transfer existing intellectual properties to hungering adventure gamers around – and this is where our story starts.

Angelsoft, Inc
At the 1984 Consumer Electronics Show in Las Vegas (the same show where the Commodore Amiga was revealed), multiple publishers announced computer game series based not only on books but also on movies.
One of these publishers was Mindscape and the company developing was Angelsoft from White Plains, New York.
Angelsoft was founded by John R. Sansevere and Mercer Mayer, both probably better known from their work as authors of children’s books.
Angelsoft would end up developing eight text adventure titles from 1985 to 1987. Six of the titles were book or film adaptations. The company was one of the few companies to compete seriously with Infocom in the pure text adventure genre. All 8 of the titles were released for both the Apple II and the IBM/PC, and 5 of them also for the Macintosh.
Angelsoft’s titles generally didn’t have much success in the established fan-base of the adventure genre, though they might have helped to attract new players by their familiarity with its licensed titles.
Unfortunately, Angelsoft came late to the show and by 1987 the text-only adventure market was fading fast, leaving room for the more accessible graphic adventure.
Games in the later second half of the ’80s were already significantly different than when Angelsoft started out. The visual capacities of home computers had greatly increased, leaving the aging text-only adventure behind.
ICOM Simulations, another developer having titles published by Mindscape, released Déjà Vu in 1985 and attracted far more attention with its fully realized “point and click” adaptation of the classic adventure game model. ICOM’s titles would enforce the term Macintoshization, the Macintosh, Apple’s 1984 home computer, featured rich graphics and sound, and probably most importantly a mouse-driven interface which had a huge influence on how especially adventure games were designed and controlled – You can find more info in my post “Bits from my personal collection – Silicon Beach Software – A Macintosh pioneer“, where I write about the first point’n’click adventure, Enchanted Scepter.

While the Rambo franchise might not be the first and most obvious choice for an interactive fiction adaption, this was nonetheless what Angelsoft did in their 1985 text adventure, Rambo – First Blood Part II.
Take on the role of Sylvester Stallone, your mission is to free prisoners from a POW camp in Vietnam. The game pretty much follows the movie.

One of Angelsoft’s titles that weren’t licensed, Forbidden Castle from 1985, written by founder Mercer Mayer.
On vacation in London, our protagonist enters an antique store, and are drawn to a magic book which hurtles you into a fantastic world, where you are to undo the harm done to the world by the wicked Blue Faerie and solve the puzzles of the forbidden castle.

Like Forbidden Castle, Voodoo Island, also from 1985, was not licensed. It was written by founder M.  J. Sayer.
On Voodoo Island the player’s task is to destroy the evil plot Dr. Beauvais is preparing, unlike other games by Angelsoft, the puzzles here do not need to be solved in a limited number of turns, giving players all the time in the world to explore the island they’re on.

The Mist, from 1985, adapted by the novella of the same name, which is seen as one of King’s best stories. The game follows King’s story quite closely.
For the first time ever, King fans could interact with his work in an unprecedented way, putting themselves firmly at the center of his chilling stories.
The player is one of the unlucky New England residents standing in the checkout line at Federal Foods as The Mist appears.  As people begin to panic in the supermarket you must survive monsters and other panicking characters while trying to get back to your son Billy who was elsewhere when the mist began to appear.

James Bond 7 – A View to Kill from 1985, follows the movie of the same title somewhat closely. You are James Bond and you must stop Max Zorin from destroying Silicon Valley and dominating the microchip market. If you fail, Max Zorin will flood Silicon Valley by creating a major earthquake. The game will take you to the Siberian Mountains, Paris, and San Francisco.

James Bond 007 – Goldfinger from 1986, based on the screenplay of EON Productions’ 1964 James Bond film Goldfinger, with some notable changes. It was penned by future Bond author Raymond Benson, who contributed towards the initial story plot/design, but left the project before its completion.

High $take$ from 1986, was the computer game adaption of Dick Francis’ High Stakes. The story centers around horse racing, a common theme through Francis’ books, and is chock-full of mystery and suspense.
The book itself is one of Francis’ biggest sellers in the U.S., and a lot of adventure fans rate this as Angelsoft’s best title.

Indiana Jones in Revenge of the Ancients from 1987, was Angelsoft’s last game.
The game took our favorite archaeologist into the Mexican jungle, fight off the onrush of vertigo as you grope through the treacherous, tunnel maze in the treasure-laden Tepotzteco Pyramid. Tighten your grip as you dangle from the wing of an airborne World War I DeHavilland. Whatever it takes, Indiana Jones must stop the cruel Nazi, Plebinheim, and his SS thugs from unleashing the power of the Mazatec Power Key against the world. Vicious bats, venomous snakes, marauding bandits.

Some of the above descriptions are taken from Mobygames.

Below my complete Angelsoft collection, for the adventure game aficionados, most of these titles are very sought after.

6 thoughts on “Bits from my personal collection – Angelsoft – Interactive Fiction”