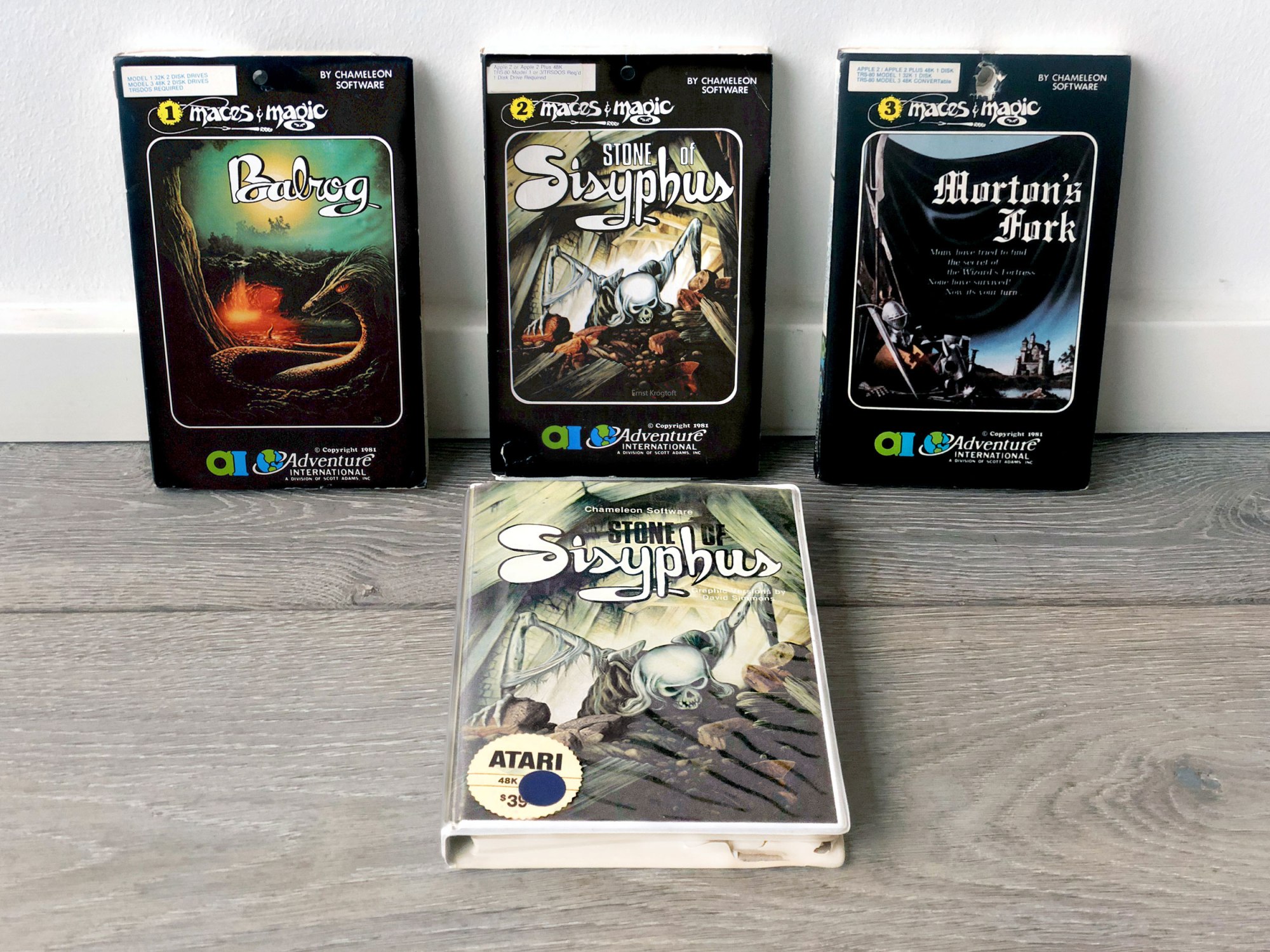 In the late ’70s, when computer games started to adopt roleplaying elements, there was no formula for how to create a computerized version of the classic pen and paper roleplaying game. Programmers tried their luck, added features and pushed the limited hardware as much as possible to encompass complex gameplay. The very first personal computer roleplaying games might, by today’s standard, look extremely simplistic and even downright obscure but nonetheless, many of these titles pioneered the genre and over the course of a few years established the computer roleplaying game as we pretty much know it today.
In 1979, slowly but surely titles like Temple of Apshai and Akalabeth paved the way for franchises like DunjonQuest, Ultima and Wizardy, the three most successful series of computer roleplaying games in the ’80s.
Apshai and Akalabeth were both roleplaying dungeon crawlers in the classical sense with a focus on statistics, exploration, and combat – very much action-driven. Around the same time, a niche genre arose focussing and relying much more on the story side while still retaining the roleplaying components.
In 1980, Donald Brown released his fantasy role-playing adventure, Eamon, for the Apple II. While Eamon would come to pretty much define the interactive fiction roleplaying hybrid genre it was surpassed by another title from 1979.

The trilogy was to an extent classical roleplaying games with statistic driven combat and the ability to collect treasures and gold to purchase different equipment but had an added layer of interactive fiction where you would use multiple choices to navigate the story and your way around the dangerous puzzle-filled world – very much like the popular Choose You Own Adventure books of the time.
The multiple-choices which drove the story, forced you to take certain paths throughout the game and while it removed the total freedom of traversing the world, it kept the story and game entertaining with funny, bizarre and unusual options and results thereby off.
Before setting out on your quest you would create your protagonist, with randomly generated stats, equip him/her with suitable weapons and armor, and enter the world in search of fame and fortune – Neither would be particularly easy to obtain, for while the story for the most parts were well written and humorous, maybe a bit on the crazy whimsical non-rational side, the combat part was not for the faint of hearted – the games are difficult, especially the first title, and with puzzles lacking logics and dangerous things jumping at you at will, the game had a certain unfairness to it – You might spend 10 minutes loading a game, generating and outfitting a character and then play for half a minute just to be “unfairly” killed and then having to start all over again. To add to the humiliation the program would keep track of how many times you had entered the dungeon and how many times you had been killed, two figures that in most cases would be the same exact number.
If you somehow managed to keep yourself alive and finished the game, you would be able to use your prosperous protagonist to enter the dungeon and play it out again with better skills and weapons.
As a testament to how difficult Balrog (Dungeon) was can be found on the back of the box of the Adventure International 1981 release where it clearly states that every dungeon has an exit and that the game can be completed, people who played earlier versions of the game simply didn’t believe it could be completed.

Balrog, also known as the Balrog Sampler, created in 1979, and initially released as Dungeon. Balrog is the first title in the Maces & Magic trilogy.
Here the TRS-80 floppy version.

Balrog was released for the Apple II and the TRS-80 (and later for the Atari 8-bit by David Simmons) and was quite a large game for its time, even thou it was text only. Featuring vast amounts of text and data, and one of the largest databases of weapons and armory, it was released on two floppy disks and would require two floppy disk drives to run – this in a time when a single floppy drive easily could set you back $400 (that’s almost $1500 in 2020 money). The Subsequently titles were smaller in size.
Balrog (Dungeon) is most likely the first hybrid RPG adventure game for the personal computer.

The Stone of Sisyphus, the second title in the series, originally published by Adventure International for the TRS-80 in ziplock bag.
On the left, the Atari 8-bit graphics version by David Simmons released in 1983
On the right the multiplatform Apple II and TRS-80 release from 1981

The Stone of Sisyphus, the second installment and also probably the best-known title in the trilogy, was a bit easier to approach. Like Balrog, Sisyphus was very well written and kept the non-rational humorous fantasy story and setting inline.
Sisyphus was the only title in the series to expand beyond the almost pure text approach when David Simmons recreated the title, with added graphics for Adventure International in 1983.
The Sisyphus Stone refers to Greek mythology, where the king of Corinth, Sisyphus was punished for being deemed a god-insurgent and for his self-aggrandizing craftiness and deceitfulness by being forced to roll an immense boulder up a hill only for it to roll down when it nears the top, repeating this action for eternity.

Morton’s Fork, the third and last title in the series. Released in 1981 for TRS-80 and Apple II (TRS-80 version on one side of the floppies and Apple II on the other).

Morton’s Fork, the third and last in the trilogy, played very much by the same core rules as the two earlier titles but the dungeon settings were swapped for a castle environment.
A Morton’s fork is a type of false dilemma in which contradictory observations lead to the same conclusion – could be a reference to the multiple paths in the game that all eventually would lead to the same end result.
Morton’s Fork was released for the Apple II and TRS-80 in 1981 in the infamous Adventure International styrofoam packaging and was not only the last in the series it was also the three medical professionals and Chameleon Software’s last title.
Even thou the trilogy didn’t see any significant success, with its text-only approach and non-rational elements, it quickly fell victim to other computer roleplaying games at the times, many of which had graphics and better combat systems, it did manage to stir up some dark legal thundering clouds on the horizon. TSR, the creator of Dungeons & Dragons apparently regarded Maces & Magic, two fantasy words separated by an ampersand, as a threat to their trademark.
With legal rumbles and the limited success of the trilogy, Bumgarner and his two colleagues closed down Chameleon Software after the release of Morton’s Fork and while they had enjoyed creating the series none of the three would go on to create another computer game.

All these titles, except maybe for 1983 Atari 8-bit release of The Sisyphus Stone are extremely rare today